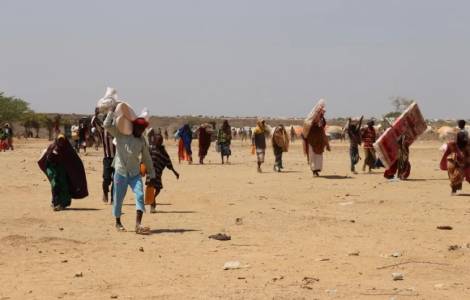 Mogadishu (Agenzia Fides) - "The recent attack by Al Shabab in Ethiopia is another demonstration of the will of the terrorist group to become an international structure and not just Somali". This is reported by sources from Somalia to Agenzia Fides, speaking about the terrorist attacks recorded in recent weeks (see Fides, 27/7/2022).
"Hundreds of well-armed and trained men entered Ethiopia countered by a strong response from the Ethiopian Army (ENDF) - continues the source -. The number of Ethiopian casualties is unknown, while there is talk of a hundred dead in the ranks of Al Shabab, including the Somali-Swedish Islamist militant Fuad 'Shangole' and two other prominent leaders".
The Al Shabab attack in Ethiopia coincides with the serious crisis due to the drought and the very strong internal clashes between the ENDF and the Oromo Liberation Army (OLA) armed group, while the delicate peace process continues with the Tigrays. On the other hand, while the specter of famine has reappeared in the country that is experiencing its worst conditions in forty years, with four consecutive failed rainy seasons, a positive signal comes from the international organizations that are helping Somalia in this dramatic moment.
The UN has allocated 9.5 million dollars to intervene in the Bay region, one of the most affected in the country by the phenomenon and the terrorist attacks. In the first three months of 2022, drought forced more than half a million people to flee their villages in search of help, often walking day and night, with young children and babies. Clashes between Al Shabab and the Ethiopian military are reportedly continuing, and in Beledweyne, Somalia, an Ethiopian army delegation met with a Somali delegation to discuss the fight against the terrorist group and coordinate military actions. Meanwhile, in Mogadishu, the change in government is bringing about big changes in the area. The new Somali President, Hassan Sheikh Mohamud, is applying a new national reconciliation strategy that includes a new political approach in addition to the military struggle (see Fides, 20/5/2022).
The appointment of the former deputy head of Al Shabab, Robow Abu Mansur, as Minister of Religious Affairs is interpreted in this light. This appointment is causing a lot of discussion but, according to the source, who has requested anonymity for security reasons, "it is a fundamental step in the fight against Al Shabab and national pacification." Foreign comment on the appointment of the former leader of Al Shabab has been very different. Robow disassociated himself from the terrorist group and became a target for the terrorists. While he was with Al Shabab, the Americans had put a $5,000,000 bounty on his head. He had been arrested and imprisoned by the government of Mohamed Abdullahi Mohamed, known as Farmajo. Currently, more than 7 million Somalis suffer from acute food insecurity, 1.5 million children under the age of five suffer from acute malnutrition, 386,000 of them in a severe form and risk their lives if they do not receive urgent treatment. (AP/GF) (Agenzia Fides, 4/8/2022)