ASIA/CHINA - A summer of intense pastoral activity for the Catholic community, towards a newfound normality 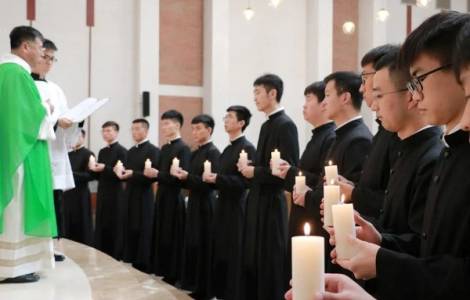 Beijing (Agenzia Fides) - The restrictions against covid in China are still in force but with less rigidity than in the past, as a result of the improvement in the health situation. Thus, the Catholic community throughout the country is experiencing a summer of intense spiritual life and pastoral commitments, appreciating the normalcy that, at least in part, has been recovered, as can be seen in the doors of the churches that have finally reopened. Information received by Agenzia Fides from all parts of China confirms the synodal harmony of the Chinese Catholic community even during this summer period.
Great feast was held for two ethnic Tibetan deacons who were ordained priests on July 18 at the parish dedicated to Our Lady in the diocese of Zhaotong. One of them is from the diocese of Dali, also in Yunnan province. Both will carry out their pastoral service among the populations of minority ethnic groups, which are numerous in the region.
The Cathedral of the capital and several parishes have celebrated, in communion with the universal Church, the Second World Day for Grandparents and the Elderly on Sunday, July 24. Great respect and high consideration for the elderly, like filial love for grandparents, are part of Chinese culture, to the point that there was already a Day for the Elderly long before the one established by Pope Francis. In addition to the Holy Mass dedicated to them, the Archbishop of Beijing, Msgr. Joseph Li Shan, and the parish priests of their communities also shared a moment of fraternity, celebrating the elderly with group photos and giving a small symbolic gift but useful to them. The Seminary of the Archdiocese of Beijing celebrated the solemn Eucharist with the missionary mandate granted to the seminarians who have completed their studies and will be sent to the different parishes to carry out pastoral training. The Executive Rector has urged everyone to observe the motto of the Seminary - "Glorify the Lord, benefit the soul and serve the people" - inviting them to "row out into the deep" to build the Church. Also in the archdiocese of Beijing, the cathedral dedicated to the Most Holy Savior, the one in Nantang dedicated to the Immaculate Conception and the one in Xitang dedicated to Our Lady of Mount Carmel, as well as many other parishes, have begun registration for the new catechetical course, which begins in August and will end next year. Among the activities for young people, the parish of Jiujiang, in the province of Jiangxi, held a training course for altar boys on July 17. Father Cao Xiaoxian explained to them the importance of their commitment as follows: "During the Holy Mass, besides the priest, you are the closest to God. So you must prepare not only the various objects that are needed, but above all your soul, your spiritual welcome...". (NZ) (Agenzia Fides, 3/8/2022)