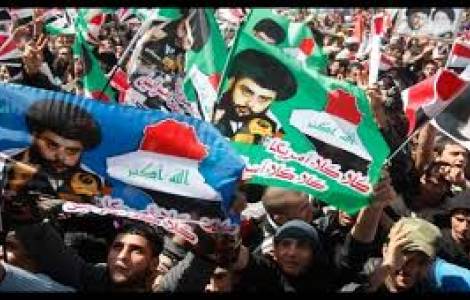 Baghdad (Agenzia Fides) - The Iraqi political blocs must start a national consultation table to end the institutional stalemate that is paralyzing the country, before "a Tsunami wipes us all away". Cardinal Louis Raphael Sako, Patriarch of the Chaldean Church, uses an extreme and disturbing image to sound the alarm regarding the new phase of political chaos that surrounds his nation. On Sunday, July 31, the militants of the political coalition led by the Shiite leader Moqtada al Sadr occupied Parliament, where the parliamentarians elected in the elections on October 10 have not yet reached an agreement for the election of the new President and the formation of the new government. The activists of the pro-Iranian Shiite parties responded to the act of force of the Sadrist militants, who organized permanent demonstrations and sit-ins in the area around the occupied Parliament on Monday, August 1. Analysts and commentators share the concern that clashes could escalate into violent clashes between armed militias and civil war chaos. "The country", remarked Patriarch Sako in an appeal released on Sunday, July 31 from the patriarchal summer residence of Ankawa, a suburb of Erbil "is in an incandescent phase, marked by political stalemate and by the unemployed and poor who take to the streets. The scenario is frightening, and delays cannot be tolerated. Political leaders and also religious authorities must remedy the situation before a Tsunami is unleashed that can overwhelm us all". In his appeal, the Iraqi Cardinal calls everyone to the need to remove the deep and structural reasons that fuel chaos in the Country, and to recognize above all the failure of the political system based on the distribution of political and institutional offices on a sectarian basis. The sectarian approach and the so-called "quota system" - the Chaldean Patriarch remarked - have produced "corruption and injustice". It is necessary to find "new approaches and new ways" to design an efficient political system, in which institutions are placed at the service of the people, and not of partisan interests.
The parliamentary elections held on October 10, 2021 had seen a clear affirmation of the electoral alliance led by Muqtada al Sadr, which in Parliament had obtained 73 of the 329 seats available. The elections, on the other hand, had reduced the parliamentary weight of the pro-Iranian Shiite parties, which had severely contested the results. After months of political stalemate, in which crossed vetoes had prevented the election of a new President and form a new government, the Sadist coalition withdrew its representatives elected by the Parliamentary Assembly, mobilizing the masses of its militants - mostly Shiites from poor areas of Baghdad and all of southern Iraq - to demand new elections and prevent pro-Iranian Shiite rivals - led by former Prime Minister Nouri al-Maliki - to form a government.
The occupation of Parliament by the Sadrist militants was aimed precisely at preventing the election as Premier of the Shiite Mohammed al-Sudani, linked to al Maliki.
In Iraq, the division of institutional offices on an ethnic-sectarian basis, which took place after the overthrow of Saddam Hussein's regime, requires the Head of State to be chosen among Kurdish political representatives, while the President of Parliament must be a Sunni and the Premier must be Shiite. (GV) (Agenzia Fides, 2/8/2022)