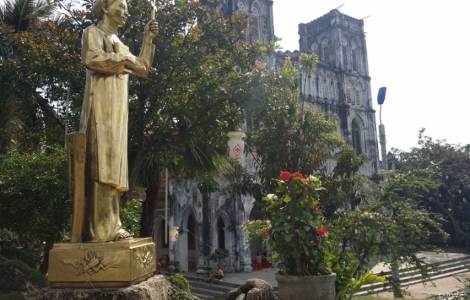 Quy Nhon (Agenzia Fides) - Gatherings of catechists, holy masses and celebrations in various dioceses of Vietnam marked the traditional Day dedicated to catechists, which in Vietnam coincides with the feast of Blessed Andreaw Phu Yen (1625-1644).
As Fides learned, the National Day reaffirmed the importance of the mission of lay catechists in the pastoral care of the Vietnamese Church.
In the church of Mang Lang, the birthplace of the Blessed, in the diocese of Quy Nhon, the catechists, mostly lay people, gathered to draw inspiration from Blessed Andreaw Phu Yen, catechist and first martyr of the Church of Vietnam. In the ancient church of Mang Lang, in the province of Phu Yen, in central-southern Vietnam, there is a monument dedicated to the Blessed, next to what is among the oldest churches in Vietnam, built in 1892 in Gothic style. During the mass, celebrated on July 26, the feast of the Blessed, Father Peter Truong Minh Thai retraced the life and example of Blessed Andreaw Phu Yen whom the catechists have chosen as their Patron, inviting them to follow in his footsteps. In the Diocese of KonTum, in the central highlands region of Vietnam, on the border with Laos and Cambodia, the Day of Catechists was organized by the Diocesan Commission for Catechesis. The Commission organized a meeting at the Pastoral Center on the theme "Synodality in the mission of evangelization", calling the catechists to reflect together on teaching, orientation and the challenges of catechesis. In the meeting, Father Alberto Nguyen Van Dap presented some suggestions in order to live synodality: "Every catechist must examine his synodal attitude. Does he listen to his neighbor? Does he put into question how to discover and deepen the catechetical ministry?"
The Bishop of the diocese of Kontum, Msgr. Aloysius Gonzala Nguyen Hung Vi met the catechists and, expressing his joy, expressed his hope that "catechists can help children and young people discover faith and walk in the footsteps of Christ". Then recalling the image of the heroic martyrdom of Blessed Andreaw Phu Yen, he invited the catechists to follow his example, "living for the Lord, bearing witness to God with word and life". Finally, he invited the catechists to collaborate with the parish priests, to be valid help in the ministry of preaching the Word of God through catechesis, especially where priests cannot arrive.
"Catechists have a mission: to nourish the faith of children and young people, following the example of Blessed Andrew Phu Yen with a spirit of unity, humility and service": this is the wish of Archbishop Joseph Nguyen Nang, Diocesan Administrator of the diocese of Phat Diem, south of Hanoi, in northern Vietnam, in front of nearly 2,000 catechists gathered in Phat Diem cathedral, before the mass in memory of Blessed Andrew Phu Yen. The Vicar General of the diocese, Fr. Anton then confirmed: "The catechist's mission is sublime, he is a minister of preaching the Word of God and is a witness of the Gospel in the world", he recalled, inviting the catechists to always have apostolic zeal. Furthermore, at the sanctuary of Blessed Andreaw Phu Yen located in the diocese of Da Nang, in central Vietnam, Dominican Father Francis Salesio Le Van La Vinh (OP) underlined in a meeting addressed to catechists: "It is necessary for the catechist to live in the spirit of synodality, walking together on the way of Jesus". A catechist, he remarked, must live three fundamental characteristics: communion, inviting everyone, families, associations, neighborhoods, streets, workplaces to be united with the body of Christ; participation, taking part in and accompanying others to participate in the pastoral life of the local church; the mission, as baptized and invited and to give the announcement of God's love for one's neighbor.
Every catechist is called to live in the synodal spirit and to inspire in fulfilling a journey of faith with peace and unity, concluded the Dominican.
In the solemn mass in memory of Blessed Andrew Phu Yen and on the feast of catechists, Bishop Joseph Dang Duc Ngan, of the diocese of Da Nang, reiterated the Lord's invitation: "If anyone wishes to come after me, he must deny himself and take up his cross daily and follow me" (Lk 9, 22-23)". And he explained: "To give up on oneself is to accept the sufferings that come in life, and to live in love and reconciliation with others". Finally, he invited the catechists to be apostles of God's charity and mercy in daily life, following in the footsteps of Blessed Andrew Phu Yen, in order to live the mission received to the full. Andreaw Phu Yen was baptized in 1641 by the well-known French Jesuit missionary Father Alexandre de Rhodes with the baptismal name Andrew. He then followed the French missionary and helped him in the Hoi An area as a catechist. On July 26, 1644, he was sentenced to death and publicly beheaded in the city of Phuoc Kieu, in what is now Quang Nam province. Today a special monument to the Blessed is also found in the parish of Phuoc Kieu, in the diocese of Da Nang. (AD/PA) (Agenzia Fides, 1/8/2022)