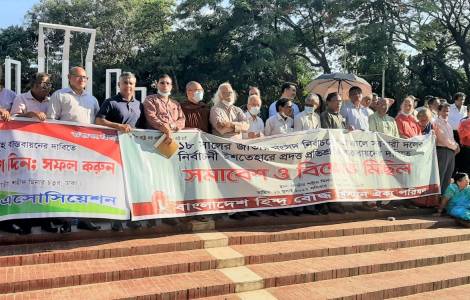 2022-08-31
Young people: in the Bible the source of evangelization and the path to Heaven

Dhaka (Agenzia Fides) – More than 100 leaders of religious minority communities in Bangladesh, a country with a large Muslim majority, demonstrate and express disappointment at the violence against their places of worship and the members of their communities.
As Fides learned, the "Bangladesh Hindu, Buddhist, Christian Unity Council", an inter-confessional body, has gathered in recent days religious and faithful leaders at the National Sahidminar (Martyr's Monument) in Dhaka, to ask the government for justice and security for the religious minorities in the nation.
The Council recalls that on July 15 a group of radical Muslims, after the alleged offense against Islam traced on the social network Facebook, attacked and set fire to houses, shops and Hindu temples in Narail. In the past, other violence took place, while "radical Islamists use false propaganda to carry out violence against religious minorities", it is noted.
In another episode, on July 5, Protestant Pastor Timothy Baroi was talking about Jesus Christ with a Muslim merchant named Muhammad Morshard in Gopalganj. At that moment, two imams from the nearby mosque, who were passing by, gathered a group of people and began to insult, threaten and beat Pastor Baroi, telling him not to talk about Jesus Christ with a Muslim. In June, Utpal Kumar Biswas, a Hindu teacher who works at Haji Yunus Ali School and College in Ashulia, near Dhaka, was beaten and later died.
This series of incidents, together with other minor cases, has generated the protest and public appeal of religious minorities demanding justice.
The Catholic Nirmol Rozario, president of the "Bangladesh Hindu, Buddhist, Christian Unity Council", tells Fides: "There have been dozens of episodes of violence against religious minorities recently, which we condemn. The police have not supervised sufficiently, while it is the task of the state to guarantee justice to minorities". Rozario recalls that the government has pledged to enact laws to combat discrimination, and to set up a special government commission to monitor respect for minority rights. "Our Prime Minister Sheikh Hasina is completing other projects but has not yet fulfilled these commitments". Professor Neem Chandra Bhowmik, a Hindu leader, notes: "The gratuitous attack on religious minorities suggests that there is a political weakness. The government has not taken adequate measures to prevent and deal with it".
As Nirmol Rozario reports to Fides, the "Bangladesh Hindu, Buddhist, Christian Unity Council" will hold a national day hunger strike on October 22, asking for the respect of the commitments undertaken by the "Awami League", the Prime Minister's party in the government, in the electoral manifesto already released in the 2018 general elections. Those electoral commitments also included the creation of a Ministry dedicated to the life of minorities in Bangladesh, the implementation of the Parbatya Chattogram peace treaty (relating to the Chittagong Hill Tracts conflict between the government and armed groups, on the question of the autonomy and land rights of the Jumma people), as well as the formation of a special Commission for land and indigenous peoples. According to "Ain o Salish Kendra" (ASK), a well-known Bangladeshi organization for legal aid and human rights, 3,679 acts of violence against religious, ethnic or cultural minorities occurred in Bangladesh between January 2013 and September 2021.
The population in Bangladesh largely professes Islam (88.7%); Hinduism (9.3%) followed by Buddhism (1%) and Christianity (1%), and other indigenous cults. There are about 400,000 Catholics. (FC) (Agenzia Fides, 27/7/2022)