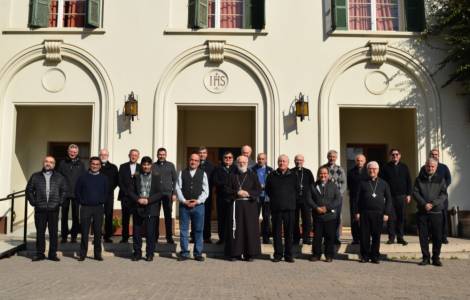 Santiago (Agenzia Fides) - On September 4, Chileans are called to approve or reject the text of the new political Constitution for the country, marking the last stage of a long process that began with street protests and violence in October 2019 A plebiscite was then held calling for a new Constitution and the election of a Convention to draft it (see Fides, 3/7/2021) and submit it to the approval of the citizens.
On March 11, 2022, Gabriel Boric, 36, a student leader of the October 2019 protests, took office as President of Chile, with the aim of radically reforming Chile's socio-political structure in a progressive direction. After his election, the President summoned the representatives of the different religious confessions present in Chile to a meeting (see Fides, 11/3/2022; 14/3/2022; 8/4/2022).
The Chilean Bishops met from 18 to 22 July 2022 to study the proposal for the constitutional document in light of the Social Doctrine of the Church "concerned about the life and development of our people", and at the end of the meeting offered their guidelines "to enlighten the conscience of all with the Word of God, especially of those who profess the Christian faith". In the text, sent to Fides, the Bishops point out that the Constitution "is a proposal that makes us face our future, with the challenge of discerning whether or not the text offered provides us with an adequate social and legal framework, to build the peace, solidarity and justice in our country, ensuring the institutional functioning that makes it possible and allows the demands of citizens, especially the most vulnerable, to be channeled". The public debate of recent weeks has not revealed a broad consensus between the parties on the proposed text, "informed discernment and a conscientious vote are necessary, always putting the common good of the country first".
It is not a question of proposing technical solutions, but of uniting the human family in the search for sustainable and integral development, according to the Social Doctrine of the Church, which is based on essential principles and values, the Bishops underline: "The first of these principles is the dignity of the human person, followed by others such as the common good, subsidiarity and solidarity, in addition to other derived principles and values such as truth, freedom, justice, peace and charity".
Proposing some guidelines on the text of the new Constitution, the Bishops write: "we appreciate the constitutional text in its proposal on social rights, the environment and the recognition of indigenous peoples. We make a negative assessment of the norms that allow the interruption of pregnancy, those that leave open the possibility of euthanasia, those that disfigure the concept of the family, those that restrict the freedom of parents to teach their children, and which pose some limitations on the right to education and religious freedom. We consider the introduction of abortion to be particularly serious, which the text of the constitutional proposal calls the 'right to voluntary interruption of pregnancy'."
The Bishops' text therefore briefly dwells on each of these points, providing some food for thought useful for discernment. In the final part, they point out that everything indicates that the constitutional debate will continue after September 4, regardless of the result of the plebiscite, so "it is important that "there is a debate not only about a text and the best rules, but about how we continue seeking an increasingly humane and comprehensive development for all", for which they invite "not to refrain from collaborating in the construction of a common project". To advance in this direction it is necessary "it is essential to grow in dialogue and social friendship, forging a culture of encounter" reiterate the bishops, who in the part of the conclusion underline: "Democracy, its various institutions and political and social organizations, will always be the best way to address our legitimate differences, but we must make an even greater effort to make it a democracy animated by the dynamism of encounter and dialogue, and based on the sacred respect for human dignity. We also have to recover our historical memory with its lights and shadows, successes and mistakes, to project ourselves into a future in which everyone finds a place in the common home". (SL) (Agenzia Fides, 25/7/2022)