AFRICA/NIGER - Desolation is one of the new names for many areas of the Sahel: space between two shores 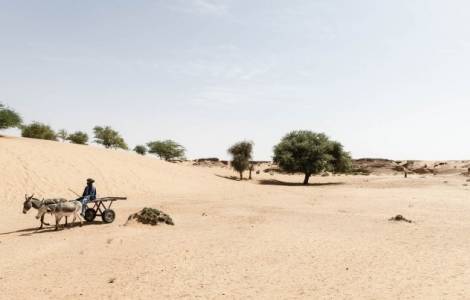 Niamey (Agenzia Fides) - "July 2019 to July 2022 is three full years of absence. This is the time that has passed, also of sand, since my last stay in Italy, mother and country according to the best traditions of the past". So says the missionary Fr. Mauro Armanino, from Niamey, on his way to Italy. "In this part of my life things have happened and others could have happened depending on the events", continues the priest of the Society for African Missions (SMA). "First of all, after more than two years of captivity in the Sahara desert, the release of my friend and fellow traveler Pierluigi Maccalli. It was in October that the news leaked out in Niamey during a meeting of people who had not stopped praying that the chains, which he had brought with him from his captivity, would conjugate the most beautiful word of all. Meanwhile, others continued to kidnap, kill and cause suffering without this arousing excessive media attention".
Fr. Mauro speaks of hundreds of peasants with their throats cut, of thousands of displaced people, of terrified children, of closed schools and clinics. "Desolation is one of the new names for many areas of the Sahel. Desolation accompanied these three years lived in the place whose name says it all: Sahel, space between two shores. Migrants know this well because, for decades or centuries, they have been passing between one shore and the other of this portion of Africa. By the thousands, they cross increasingly armed and inhospitable borders, where traders, smugglers, bandits, armed terrorist groups, jihadists and former salt caravans vie for loot".
"Then came sanitary totalitarianism, THE disease, THE pandemic, THE fear... Here people continued to die of malaria and hunger and armed violence, but the borders had to be stopped, hands washed (but first water had to be found), keep your distance and, above all, learn to get vaccinated. Also, during these three years, there were them, the lords of the road. The donkeys that pull the same cart and are beaten at every step, the camels that follow in line, the herds of oxen that feed on the plants that the municipality planted the previous season and the goats that count the days before being slaughtered in the manner of Abraham, years ago. The streets of Niamey that the sand wraps every night and that the cleaners collect the next morning before it comes out again thicker than before. The loudspeakers that call the faithful to prayer several times a day, starting early for the sun to rise. The offices of the ministries that open according to the circumstances and the inevitable funerals that do not miss their weekly appointment. The wedding processions of cars and motorcycles flouting the speed limits, for marriages that last a few months before breaking up and trying again elsewhere. The vendors of everything that appear and disappear depending on the time of day and the season of the year, and the unemployed who live by waiting. Women, elegant as veiled queens, double park to go shopping". (MA/AP) (Agenzia Fides, 25/7/2022)