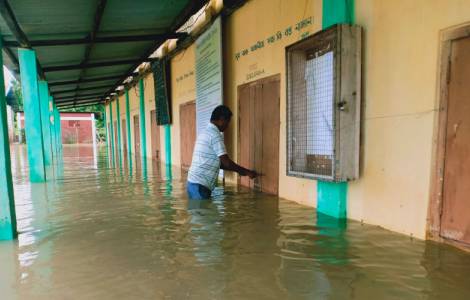 Silchar (Agenzia Fides) - "The state of Assam is once again flooded and abandoned. Year after year we have to deal with the loss of life, crop damage and loss of livestock and wildlife. The state of Assam is regularly plagued by the anger of the powerful Brahmaputra and its tributaries causing untold human misery and devastation". Thus reports to Agenzia Fides Brother Babu Madhu, a Camillian missionary (MI) who works in the Camillian task force (CTF), following the floods that have seriously affected the state of Assam, in India. "The recent floods", said Brother Madhu, "have been a severe blow to the people and the state as a whole: the incessant rains and landslides have created havoc across the state. According to a report by the Assam State Disaster Management Agency (ASDMA), the affected population in the last few hours has increased from over 250,000 to over 300,000 in the last few hours. Many people have fled to high places, including school buildings and embankments". The death toll from the floods is over 200 so far. "We set out immediately," explains Brother Madhu, "to improve the living conditions of the poor people in the state of Assam. In cooperation with St. John's Medical College Hospital and the Guwahati Gana Sevana Society, we have organized medical relief camps in the most affected districts of the state." Very heavy rains have been reported in the states of Assam and Arunachal Pradesh in the last few days. The main course of the Brahmaputra river and its tributaries, especially in the districts of Dhubri, Goalpara, Jorhat and Sonitpur, are in a very critical condition: "Many new areas in the districts in northern Assam", reports the missionary, "are due to the heavy rains that have flooded Assam and Arunachal Pradesh. In the town of Silchar, several neighborhoods are still flooded and the situation remains critical with a shortage of food, drinking water and medicines for those affected. Many people - he continues - have been transferred to the rescue centers following the warning signal issued by the government in most of the affected districts. The major rivers have burst their banks, inundating new areas and displacing thousands of people, since last week, sweeping away hundreds of huts and damaging buildings, roads, bridges and crops worth thousands of rupees".
Through its projects, the Camillian Task Force aims to build a resilient community to support and accompany people affected or exposed to natural disasters: "A significant number of Camillians," emphasizes Brother Madhu, "among them lay people, priests and religious at provincial level, organize relief efforts in synergy with local and international partners engaged in humanitarian and development activities", he concludes. (ES) (Agenzia Fides, 21/7/2022)