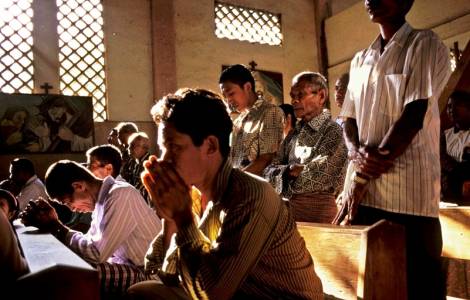 Jakarta (Agenzia Fides) - The Catholic Church in Indonesia honors and celebrates a German nun who pioneered working among lepers on Flores island of Indonesia died on June 27. She was 93. Sr Virgula Maria Schmith, a member of the Missionary Sisters Servants of the Holy Spirit, also known as Holy Spirit Missionary Sisters passed away in Steyl, Netherlands.
The nun started St. Damian and St. Rafael Rehabilitation and Leprosy Rehabilitation Centers in Cancer and Binongko on Flores Island, said Sister Yohana M. Momas, the Provincial Missionary Sisters Servants of the Holy Spirit in Indonesia.
Sr Virgula was born on September 3, 1929, in Grunebach, Germany. She went to Indonesia in 1965 as a missionary. She spent years in the Manggarai area of eastern Flores.
Her mission was to help the poor and sick with the motto "I am called to release those who are chained by different ailments because they are God's children".
Initially, there was a leper patient whose family abandoned him in the wilderness. A Franciscan priest discovered him and brought him to the St. Rafael Polyclinic, where the German nun worked.
"I was amazed and astonished when the priest brought the patient to me," His body was riddled with wounds, and his hair was unruly and lengthy. I was unsure of what to do. Nonetheless, I accepted the patient and provided him with the finest care. Then I requested assistance from my relatives in Germany, and they assisted me, the nun had said in 2011.
She explained, "Since then, in 1966, the leper apostolate has been separated from the St. Rafael Polyclinic". She stated that God was responsible for what had transpired.
"It is not all my work. I am not a wonderful or intellectual individual worthy of being written about. I obey God's will. I pray each morning, "Lord, show me what you want me to do today and give me the ability to do it, the nun had said. "If God desires something, we cannot resist it. I do not experience anxiety or fear because I trust that God is with me. The nun stated, as reported by Floresa.com. "I believe and experience that God cannot abandon us, according to the pioneering nun.
She, too, believed that her work was "like a divine miracle". She had observed countless "miracles" made by God in her lifetime.
The first miracle was the survival of Yance, the first orphan she cared for. He was prematurely born and weighed 600 grams at birth. The nun and her team assisted him in a time of need. "Infusion fluids are generated from rainwater that has been filtered."
God - the nun said - always provides timely assistance. When the nuns need medicine, clothes, food, or other services, there is always help available, especially in the form of money that is worth the same as what we need.
Sr. Virgula was a strong missionary, a pioneer, and the first person to do humanitarian work, especially for people with disabilities and leprosy, as well as victims of sexual violence in Indonesia.
"Sr. Virgula was creative and lived an intercultural life by loving the Manggarai culture very much", said Sr Momas, the provincial of her congregation. The German nun collaborated with others in the mission. She was a person, who embodies the spirituality of ‘passing over’ the missionary undertaking, always ready to pass on the mission to other nuns.
The "Missionary Sisters Servants of the Holy Spirit" is a worldwide religious congregation within the Catholic Church. It has more than 3,000 members in 46 countries. Saint Arnold Janssen founded the congregation in Steyl on December 8, 1889. (SD) (Agenzia Fides, 20/7/2022)