EUROPE/ITALY - "Dreaming under the stars": Doctors with Africa CUAMM and Pope John Paul I 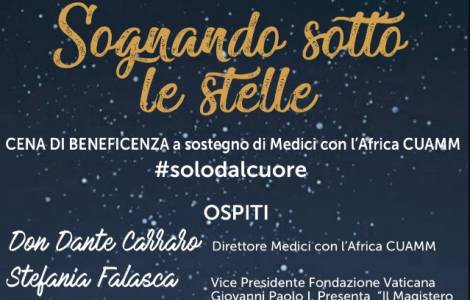 Padua (Agenzia Fides) - A special meeting will be held tonight, July 14, 2022, in Campo San Martino, Padua, between Doctors with Africa CUAMM and the John Paul I Vatican Foundation. Focus will be on Africa and the next beatification of Pope John Paul I, which will be held in Rome on September 4, 2022.
The combination between the health organization for the promotion and protection of the health of African populations and the Foundation apparently might seem a strange. In reality, going into greater depth with the protagonists, one can see the missionary heart that animate CUAMM and Pope Luciani.
"Faith that becomes a concrete commitment of so many ordinary people", said the Director of the organization, Don Dante Carraro, reached by telephone for the occasion by Agenzia Fides. The missionary doctor has just returned from South Sudan where he had gone to welcome the Secretary of State, Msgr. Pietro Parolin, sent to the country by Pope Francis. Don Dante spoke to us about the situation in South Sudan which is worsening due to multiple factors, both external and internal. The war in Ukraine which is causing something in Africa that the general public does not see. These include the dramatic increase in the prices of gas, food and medicines. "People find it much harder to reach the end of the month - said the missionary doctor - and the fact of not being able to feed their children generates enormous social tensions. Even in our hospitals, the government struggles to pay wages.
The CUAMM director also points out - due to the war in Ukraine, many of the resources destined for Africa are being lost. This is the case of a fund destined for the Rumbek state hospital where we are present, financed by the countries of the European Union, England, the Nordic countries, which will be suspended at the end of July. It is a facility that has so far assisted 2,500 deliveries in addition to thousands of outpatient visits.
"Don Dante goes on to highlight how much political instability still weighs heavily in the country. "We can define a 'laboratory' that of the two realities represented by president Salva Kir and first vice president Riek Machar. Ministers change constantly and it is difficult to always have the same interlocutors, thus creating difficulties for everything, safety, health, school. In order to make us feel close to the population and to the people who are discouraged in these fragile contexts, I have been to South Sudan 5 times this year. There are many people of good will, local, institutions, mayors, everyone is willing to collaborate".
Moving on to talk about the "Under the stars" meeting that will take place this evening, the director of CUAMM explained that it is "an evening that has great value for our Church and our people. To date, about 650 people are registered. The Christianity in which we believe is made up of important and significant collaborations in which people feel concretely involved.
Pope Luciani underlined the maternal, charitable, missionary dimension of so many suffering and Pope Francis takes it up in his own way. Nobody, much less the South Sudanese people, will ever forget Pope Francis in the Vatican kneeling in front of South Sudanese leaders Salva Kiir and Riech Machar kissing their feet and asking for a real commitment to peace.
Pope Luciani highlights the importance of the charismatic figure that the Pope represents for populations such as that of South Sudan. The figure of the Pope - concludes Don Dante - is the symbol of a Christianity that listens to the cry of the oppressed, as Cardinal Parolin pointed out when reporting the message of Pope Francis".
The great work carried out so far by the Foundation, of which the Vatican Secretary of State, Cardinal Pietro Parolin and Deputy President, Dr. Stefania Falasca, is the result of decades of studies, meetings, insights that also want to be an opening key to the missionary experience of the future Blessed Luciani. (AP/DC) (Agenzia Fides, 14/7/2022)