AFRICA/SOUTH SUDAN - In Lui, the dream is of going from weapons to hoes to books 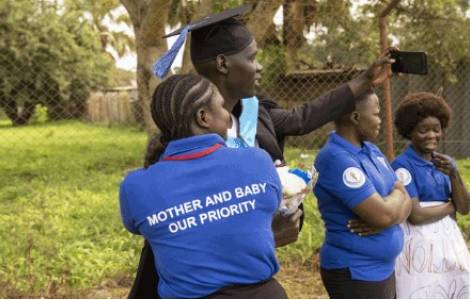 Lui (Agenzia Fides) - "True revolutions are born from tenacious work, from sowing day after day, in the midst of efforts, sacrifices and commitment", declared Don Dante Carraro, director of Doctors with Africa CUAMM, on the occasion of the graduation ceremony of eight young men and two women at the Lui Hospital School in South Sudan.
To the singing of "Mother and baby, our priority!" the ten new midwifery graduates swore: "I am ready to serve my community wherever it is needed", said one of the undergraduates.
"To hear about service, about community, about wanting to respond to the needs of the poorest is a revolution for South Sudan", adds Don Dante.
The note sent to Fides states that before the ceremony, the procession of undergraduates went through the streets of Lui, to make the community participate in the celebration. "On the side of the road, the children armed with hoes, looked ecstatic: in their eyes the dream of going from weapons to hoes to books!
It was an immense feast, joy, an explosion of life, a song of liberation, which spread in the courtyard of the Institute of Health Sciences in Lui, under a scorching sun".
The CUAMM director addressed a special thought of gratitude to the tutors, three Ugandan midwives, with experience, who said 'yes' to CUAMM's call to move to a country near theirs, more in need and in serious difficulty such as South Sudan. "It is Africa that helps Africa" - underlined Don Dante.
"The new graduates are the sign of the hope that does not give up, that resists even in difficult contexts that put you to the test: the institutional crisis that South Sudan finds itself, still in search of peace; drought that dries up the soil; the war in Ukraine which dramatically increases the prices of basic necessities, as well as gas and oil. It is a hidden war, which no one talks about and does not seem to exist and instead is having a hard impact, especially on the most fragile groups. In this last period the situation has become dramatic. The country is on its knees and the government is unable to pay the wages of health workers and guarantee medicines. The population is exhausted". "CUAMM and each of us strongly feel the 'duty' to be at the side of these situations, to continue to be there, artisans of good, humble and obstinate, close to the poorest, thanks to the help of all", he concluded. (AP) (Agenzia Fides, 13/7/2022)