AFRICA/ETHIOPIA - Despair, illness, death: an existential threat to the people of Tigray. Appeal from the Diocesan Catholic Secretariat of Adigrat 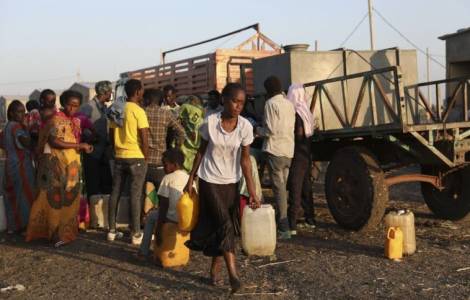 2022-11-04
Silent Proclamation: “There are no professional missionaries at work here”

Adigrat (Agenzia Fides) - "I once again urge all the partners involved to continue supporting humanitarian aid for people affected by the war in Tigray in order to respond together to the immense humanitarian need of the Tigrinya people". This was stated by Abba Abraha Hagos, diocesan director of the Catholic Secretariat of Adigrat (ADCS), in a note sent to Fides. After the humanitarian ceasefire promoted by Prime Minister Abiy (see Fides, 25/3/2022), thanks to which the population was able to have minimal access to food and non-food items, medicines and a few other services, from June 21, 2022, air transport is again paralyzed, which aggravates the situation of the Tigrayans. Currently, basic necessities and services are not available on the market or are very expensive and inaccessible to most of the population. In addition, lack of fuel and money, coupled with sanctions imposed by the Ethiopian federal government, have restricted the distribution of humanitarian aid in several districts and cities in Tigray. All basic services such as telecommunications, internet, banking services, transport services and connections between Tigray and other regions of Ethiopia are also blocked. The continuous siege of the region by the Federal Government of Ethiopia has been isolating the population of Tigray from the rest of the world for more than 600 days (see Fides, 3/12/2020). Millions of people are exposed to severe malnutrition, hunger and famine, according to the statement. Millions of people live in IDP centers in various cities, towns and rural areas of Tigary without food, shelter, water, medicine and other basic necessities, leading to despair, illness and death. Abba Agos calls on all humanitarian partners and organizations to "give the population a voice so that they have unrestricted access to humanitarian aid by land and air, guaranteeing their right to a dignified and secure life." "The situation is dramatic", he says, "and has become an existential threat to the people of Tigray. As of January 2021, the Ethiopian Catholic Church - the Diocesan Catholic Secretariat of Adigrat (ADCS) and religious congregations operating in the Catholic Eparchy of Adigrat work to address the priority needs of the war-affected population. Thanks to the financial and material support received, ADCS's emergency response programs have saved the lives of hundreds of thousands of people. However, while ADCS and religious congregations are able to raise funds and mobilize resources from various partners, the current siege on the region has affected the delivery of these programs and continues to limit efforts to reach those most in need. (GF/AP) (Agenzia Fides, 12/7/2022)