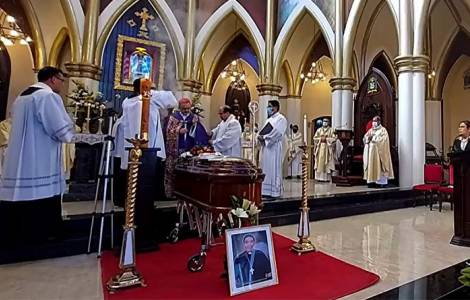 2022-09-28
Democracy is weak, we need an Ombudsman who has the support of all political and social forces

2022-09-14
Amazon: Gold mining alters the environment and pollutes, with devastating effects on human and animal health

2022-08-05
Month of the Catechist in Santa Cruz: "Walking together in Communion, Participation and Mission"

2022-07-08
Diocesan clergy: "May the synodal journey be a source of profound renewal for the Church and for all of society"

Oruro (Agenzia Fides) - On Saturday, July 9, the funeral of Msgr. Waldo Rubén Barrionuevo Ramírez, CSsR, Bishop of the Apostolic Vicariate of Reyes, National Director of the Pontifical Mission Societies (PMS) and President of the Evangelization Area of the Bolivian Episcopal Conference (CEB) were held in the Cathedral of Oruro, where he was born on September 9, 1967.
The Bishop died on July 7 at the Arco Iris Hospital in the city of La Paz, where he had been admitted for a stroke on July 5.
The funeral Mass was presided over by the Bishop of Oruro, Msgr. Cristóbal Bialasik, and concelebrated by various Bishops and priests, including the Redemptorist Fathers, the religious congregation to which he belonged. Family members, religious men and women, authorities and friends were also present. In his homily, Monsignor Bialasik highlighted the life and testimony of Monsignor Barrionuevo, remembering him for his simplicity and closeness to everyone, he passionately lived his Redemptorist life and his great devotion to the Virgin Mary. "An instrument in the hands of God for good", said Msgr. Bialasik, affirming that Msgr. Barrionuevo's life had no meaning without the mission, that he never forgot Oruro and lived happily as Bishop, priest, friend, Pastor of his people, faithful to Jesus, and accepted the cross with serenity.
The Apostolic Nuncio, Msgr. Angelo Acattino, read the message in which the Holy Father, Pope Francis, expressed his deep sorrow to all members of the particular Church, relatives and acquaintances, assuring them of his suffrage prayers. Monsignor Adolfo Bittschi, Auxiliary Bishop of Sucre and head of the CEB Missions area, read the letter sent by the Undersecretary of the Dicastery for Evangelization and President of the Pontifical Mission Societies, Archbishop Giovanni Pietro Dal Toso.
Saddened by the news of Bishop Barrionuevo's death, the Archbishop recalled his homily during the General Assembly of the PMS, in which he had insisted on the missionary commitment of every Christian. Monsignor Dal Toso, saddened by his loss, thanked Monsignor Barrionuevo for his generous service to the Pontifical Mission Societies.
Msgr. Giovani Arana, Bishop of El Alto and Secretary General of the Bolivian Episcopal Conference (CEB), read the message of Msgr. Aurelio Pesoa Ribera OFM, President of the CEB, in which he highlighted the joy of Msgr. Barrionuevo, his passion for the proclamation of the Gospel and his enthusiastic work for the Kingdom of God. He will be remembered as "a devoted pastor, concerned about his people, of a simple life, a friend of all, always with a smile that shared joy and comfort." Bishop Eugenio Coter, Apostolic Vicar of Pando, spoke on behalf of the Amazonian Ecclesial Conference, CEAMA, and the Pan-Amazonian Ecclesial Network, REPAM, citing the commitment and testimony of Bishop Barrionuevo in the Amazon and in defense of the Amazon and all the people who live there. At the end of the funeral Mass, the Bishop's body was buried in the Crypt of the Sanctuary of Our Lady of Dolina. In an interview granted to Agenzia Fides at the beginning of his episcopal ministry as Auxiliary Bishop of the Apostolic Vicariate of Reyes (see Fides, 2/10/2014), Msgr. Barrionuevo Ramírez, C.Ss.R. had stressed that his objective in that territory, which should be understood as an Amazonian region of Bolivia with indigenous, nomadic and settled communities, was precise: to consolidate "the sense of belonging, because in the area before there were only divided groups of indigenous peoples". Later, groups of Bolivian emigrants arrived and now a new group of workers. In addition, people live in two politically divided departments, while the Apostolic Vicariate is one, and I think it is a great challenge to work to be a single Christian community". (SL) (Agenzia Fides, 11/7/2022)