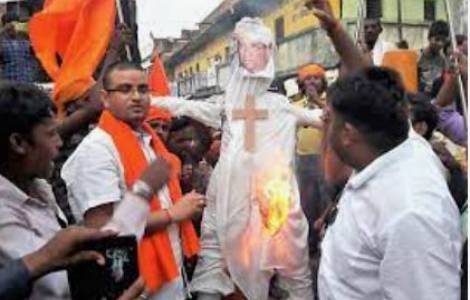 New Delhi (Agenzia Fides) - In the year 2022, from January to the end of May, 207 cases of violence against Christians have been recorded in India. This is stated in a note sent to Agenzia Fides by the "United Christian Forum" (UCF), an ecumenical body that monitors, with a special and free telephone number, cases of violence. "This year, looking at the data, there has been more than one incident a day," says Catholic A.C. Michael, president of UCF, recalling that 2021 has been described as "the most violent year for Christians", with 505 incidents of violence recorded throughout the country. In 2022, the most violent state so far has been Uttar Pradesh, with 48 reported incidents. It is closely followed by Chhattisgarh with 44 episodes. Incidents include sexual violence, intimidation and threats, social ostracism, vandalism and desecration of religious sites, and disruption of prayer services. In most of these cases, physical brutality and the arbitrary closure of chapels or worship rooms go unreported. Among the cases reported by UCF, in early May there were two incidents of social boycott and assault against Christian believers in Chhattisgarh, both from Bastar district. In the first incident, a 65-year-old Christian woman and her son were beaten and threatened with social boycott by the "Panchayat" (village council) when they refused to renounce their faith. In the other case, an entire Christian family in the same district was marginalized and denied access to services such as water and electricity. In another incident, on May 31 in Jaunpur district, Uttar Pradesh, a Protestant pastor was celebrating a prayer liturgy when a mob entered the chapel, dragged him out and beat him, claiming he was converting the people by force.
"The UCF toll-free number helps people who are targeted for their faith by providing legal advice and guidance", explains Michael, a former member of the Delhi Minorities Commission. "It is alarming that religious freedom is so brutally trampled on by a few extremists. We strongly appeal to the authorities to take this matter seriously. Peace-loving Indian Christians respect constitutional freedoms and simply wish to live their faith in the nation", he concludes. Christians make up 2.3 percent of India's 1.3 billion people, 80 percent of whom are Hindus. (SD/PA) (Agenzia Fides, 4/7/2022)