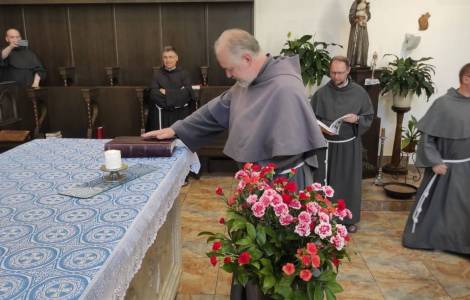 Moscow (Agenzi Fides) - "We have decided to stay close to the people, not to leave the communities and parishes where we currently carry out our pastoral service; we will continue our mission for the benefit of those we meet, first of all the poor and the forgotten", says fra Dariusz Harasimowicz OFM Conv, sharing with Fides the main pastoral themes touched upon during the sixth General Chapter of the Russian General Custody of St. Francis of Assisi (Rossijskaja General'naja Kustodija sv. Franciska Assizskogo), held in Saint Petersburg from 21 to 27 June.
The Chapter, which re-elected Friar Dariusz, a missionary in Russia for twenty-six years, as Custos General, outlined the new perspectives for the next four years: "The most important point - underlines the friar - was to understand that, despite the small number of friars, we are called to stay where we are, strengthening our presence in the realities of the cities where we have our six convents, namely Moscow, St. Petersburg, Chernyachovsk, Kaluga, Astrakhan and Nur-Sultan, in Kazakhstan".
Today, the Friars Minor Conventuals in Russia and Kazakhstan are sixteen in all, from Lithuania, Slovenia, Poland, Belarus and Italy, in addition to three young people in formation (one of whom of Russian origin and one of Kazakh origin). The General Chapter pronounced itself on the choice of continuing to live in small communities, but located in several places, so as not to diminish the pastoral service in the communities where they already worked.
The other issue that was brought into focus during the works was the importance of a wide and effective use of the order's convent in St. Petersburg: "The structure allows groups of faithful to be accommodated for meetings and spiritual exercises", explains Friar Dariusz.
The third pastoral theme that the Custos refers to is the desire expressed by the Chapter to continue, in the next four years of missionary presence in Russia and Kazakhstan, the activity of the Franciscan publishing house, founded by the order in Moscow in 1994: "Through our publishing activity, we do not want to make profits, but we would like to implement publications as a tool for evangelization. There is the desire, but financial resources are also needed to make it happen, and at the moment they are very limited".
The recent history of the order in Russia and Kazakhstan begins after the fall of the USSR, when in 1993 the minor conventual friars were called to those lands by Msgr. Tadeusz Kondrusiewicz, then apostolic administrator of European Russia. At the beginning of their mission, the friars depended on several Polish provinces of the order and in 2001 the Russian General Custody of St. Francis of Assisi was born, which also includes Kazakhstan. (CD/PA) (Agenzia Fides, 5/7/2022)