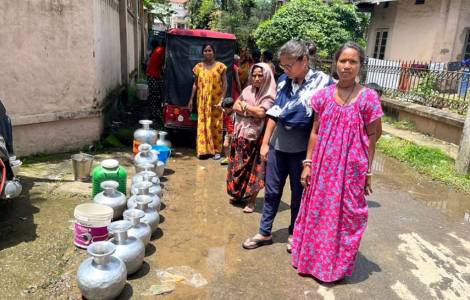 Guwahati (Agenzia Fides) - It is urgent to help the survivors of the heavy floods that hit Assam, a state in north-eastern India. This is what Archbishop John Moolachira, at the head of the diocese of Guwahati, capital of Assam, asked in an appeal sent to Fides. "The floods have created chaos and severe inconvenience. Since the Catholic Church has always stood by the victims of such disasters, I urge that the request for humanitarian aid be extended as far as possible to people affected by a disastrous natural disaster, regardless of ethnicity, culture or religion", writes the Archbishop. Father Maya Martin, director of the "Guwahati Gana Seva Society" (GGSS), an organization which is the social arm of the archdiocese, told Fides: "We have provided rations and other basic necessities to 1,150 families after the first series of storms, but the disaster has not yet been overcome". After a first wave of rain in May, a second wave of rainfall caused the release of water from the Kurisho Dam in Bhutan, resulting in the flooding of several rivers in Assam, he explained.
The victims of the second wave took refuge in rescue centers. Most of the houses have been completely damaged and wiped out, as well as the crops in the fields, the livestock. Road transport and communications are interrupted. Women and children in relief camps live in difficult conditions, as the issue of health and hygiene in the rescue camps has also become a cause for concern, along with the shortage of food and drinking water in the same centers. Government agencies, NGOs, public and private institutions, Christian communities are trying to find and organize solidarity chains.
Pallabi Ghosh, social worker and human rights activist, resident in Assam, told Fides that his team of volunteers and some NGOs are doing their utmost for aid "especially for the rental of boats, useful for the distribution of water and food". Among other things, he notes, speculation is taking place, because "boat owners are taking advantage of this situation by increasing rental prices for activists and social workers", complains Gosh, inviting them to contribute to the purchase of boats, to distribute relief materials to remote villages. "We are short of volunteers," Gosh says.
The entire state of Assam is currently inundated. The lives of the populations have been paralyzed due to the devastating floods. Thousands of people are desperate for clean water and need help. Assam has been severely hit by floods caused by heavy rainfall, resulting in landslides and generalized damage.
According to the government, this year's flood is significantly worse than in previous years. About 4.7 million people have been affected and 2.3 million individuals have received shelter in 810 rescue centers set up by the authorities, while 83 have died. The rain began in mid-May and a second wave, which lasted until June 18, devastated people's social lives, causing extensive damage to homes, livestock, crops and property. (SD-PA) (Agenzia Fides, 27/6/2022)