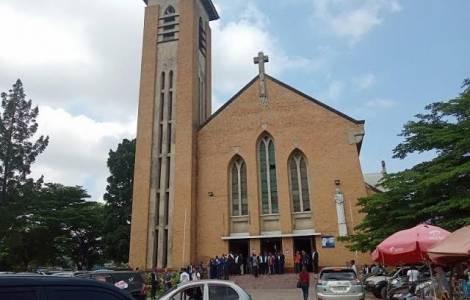 Kinshasa (Agenzia Fides) - "To show the great consideration he has for our country, the Holy Father has decided to send His Eminence Cardinal Pietro Parolin, Secretary of State of Vatican City, to Kinshasa to pray with us on Sunday 3 July 2022", this was announced by Monsignor Donatien Nshole, Secretary General of the National Episcopal Conference of the Congo (CENCO), at a press conference held at the Kinshasa Interdiocesan Center on Saturday, June 25, 2022. July 3, in fact, is the day Pope Francis was supposed to celebrate mass in Kinshasa. Following the postponement of his visit, Pope Francis announced that he will celebrate Mass with the Congolese community in St. Peter's Basilica in the Vatican on this date. "We will take Kinshasa to St. Peter's, and there we will celebrate with all the Roman Congolese, who are many," he said during an audience on June 13. That same day, the bishops of the National Episcopal Conference of the Congo (CENCO) had issued a message of encouragement in which they invited their faithful to serenity and patience. They then announced the celebration, in all the dioceses of the Democratic Republic of the Congo, of a mass on July 3, to pray "for peace and reconciliation in our country and to invoke divine grace on the health of the Supreme Pontiff". "As a sign of communion with His Holiness Pope Francis, who on Sunday 3 July 2022 will preside over the Eucharist in St. Peter's Basilica with and for the Congolese community, His Eminence Cardinal Fridolin Ambongo, Metropolitan Archbishop of Kinshasa, invites priests, religious and nuns, young people in formation, the lay faithful to participate en masse in the Eucharist on Sunday, July 3, at 9:00 a.m., in the parish of Saint Alphonse de Matete", reads a statement dated June 25, 2022, signed by Abbé Edouard Isango, Secretary Chancellor. When asked if the Pope's trip to the DRC is canceled and replaced by Cardinal Pietro Parolin's visit, "CENCO assures the Congolese men and women that this visit by the Prime Minister of the Vatican City State to Kinshasa will not replace that of Pope Francis, which has only been postponed, and for which new dates are expected", said Monsignor Nshole. In addition, he considers that the confirmation of the Pope's trip to Canada is "an encouraging sign", indicating good progress towards the Holy Father's recovery. (P.M.P.) (Agenzia Fides, 27/6/2022)