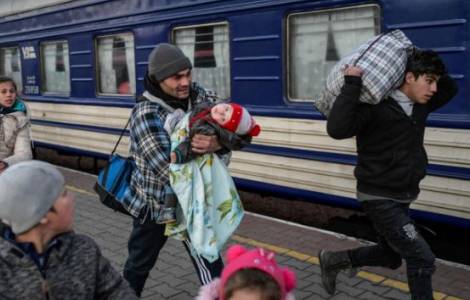 Odessa (Agenzia Fides) - The Caravan of Peace and Solidarity arrived this morning in Odessa, the Ukrainian port city on the Black Sea. It had left the Italian city of Gorizia on Saturday where, on behalf of the civil society network "StoptheWarNow", it had gathered for the departure of a second humanitarian aid convoy which, for the second time in three months, has reached the victims of the conflict in Northern Europe. The caravan, made up of seven vehicles with about forty people from various associations, Catholic and non-Catholic, was joined in Galati (Romania) by Msgr. Francesco Savino, vice president of the Italian Episcopal Conference (CEI) who, in recent days, has formalized CEI's support for the second initiative of the "StoptheWarNow" network.
Last April, the coalition had brought to Lviv, in northern Ukraine, more than sixty vehicles loaded with food and medicine to return to Italy with the elderly, disabled and displaced people fleeing the war (see Fides, 2/4/ 2022). This time the mission is much more demanding precisely because of the situation on the ground, but also for this reason it is more significant, as explained to Fides by Gianpiero Cofano, president of the John XXIII Association, one of those responsible for organizing the convoys: "The need for peace is increasing," says Cofano, "and this convoy, with some 40 tons of humanitarian aid, intends to reach Odessa and Mykolaiv. Why those two places? Because they are the focal points in which the fate of this conflict will be decided in part, while a timid diplomacy is addressed to Kiev, unfortunately only to Kiev. We believe in a 'diplomacy from below' that is also made of physical presence, of bodies, of people. For us, the most important meeting will be with the victims of the war, to share their pain with them and make them feel how close we are to them. The important thing is that they themselves have invited us. We, who think we are the those who welcome, will instead be welcomed by them, in their homes: it will be our way of saying that Europe is not deaf and blind and that our diplomacy from below knows how to speak of peace. It is present as a sign of peace and knows how to listen", concludes Cofano. The Catholic world is present in Odessa with various associations (Pope John XXIII Community, New Horizons, Focolare Movement, National Caritas, Sulle orme and many others) while other Catholic associations and movements have also expressed their intention to join the coalition. "StoptheWarNow", which already brings together more than 175 Italian Catholic and lay associations. In July (July 14-18) a new Peace Caravan will be organized to continue the journey that began in April with the first trip to Lviv and now stops in Odessa. (EG/PA) (Agenzi Fides, 27/6/2022)

AFRICA/CHAD - Salesian missionaries: with the compassion of Jesus, alongside families impoverished by the food crisis