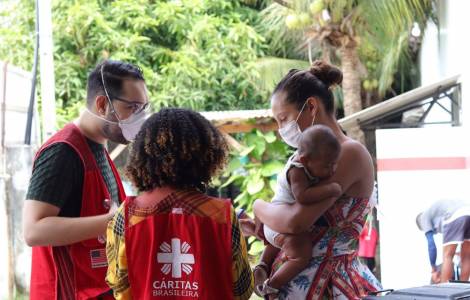 Brasilia (Agenzia Fides) - People who have emigrated from Venezuela and have sought refuge in Brazil often raise questions about access to services, their rights and seek the information they need to live with dignity. The proposal of the Orinoco Project: "Waters that cross borders", from the Caritas network, with the podcast "Migre, y ahora?" launched in recent days, aims to provide answers to questions and many other doubts. The first season of the program will have seven episodes, according to the note sent to Fides, all in Spanish, in which fundamental questions about the rights of migrants and refugees in Brazil will be answered, on topics such as social assistance, public health, the fight against phobia, the labor market, hygiene and the protection of minority groups. The episodes have been produced and carried out by Cáritas workers in the Orinoco, who went to the streets to listen to the main doubts of the migrant population, assisted by the project in five Brazilian states, which also represent the questions of thousands of other people welcomed in Brazil. Raphael Macieira, national coordinator of the Orinoco project, has commented that, like Cáritas, the objective is always to serve people in situations of social vulnerability and offer humanized care. "Migration is a challenge, especially when it comes to forced migration, as is the case for the majority of Venezuelans in Brazil. Arriving in a country with different languages, cultures and laws, only with the desire for a better life, can be scary to say the least. That's why we came up with the idea of creating a podcast for immigrants. We sincerely hope that this material produced will generate acceptance." The program will be available weekly, between June and July, on the digital platforms of Caritas Brasileira.
Since 2019, the Orinoco project, of the Caritas network, has been serving the migrant population that has left Venezuela in Boa Vista and Pacaraima. In these two cities, the project has installed premises with toilets, showers, laundries and drinking water fountains. There are three health facilities in the capital and one in Pacaraima. In Boa Vista there is also a second laundry with industrial washers and dryers. In 2021, with the support of the United States Office of Population, Refuge and Migration (PRM), the Orinoco project in Roraima also reached the municipalities of Mucajaí, Caracaraí and Rorainópolis, as well as four other Brazilian states: Acre, Pará , Piauí and Rondônia. (SL) (Agenzia Fides, 25/6/2022)