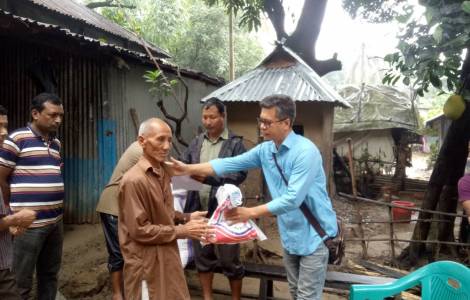 2022-07-27
Appeal by religious leaders: justice and security for religious minorities

Mymensingh (Agenzia Fides) - The Catholic community in Bangladesh is mobilizing for the victims of the floods that have hit the country in the last 10 days. Thanks to an action promoted and coordinated by Caritas Bangladesh, food, medicine and drinking water are reaching displaced people, victims of extreme flooding in 17 districts of Bangladesh. More than four million people are suffering from last week's floods, which the Directorate General of Health Services (DGHS) said claimed 68 lives, including 47 in Sylhet division. As Fides learned, Caritas in Sylhet distributed food (rice, cereals, mineral water) to 150 families affected by the floods in Jamalganj Upazila, in the district of Sunamganj. Caritas in the Diocese of Mymensingh provided emergency aid to 280 flood-affected people in Dhorompasa sub-district. Most of the people in Durgapur, Kalmakanda and Dharmapasha Upazilas districts as well as Netrokona and Sunamganj districts have been living in very harsh conditions since June 16 due to sudden floods. Caritas distributes food, essential medicines, candles and lighters to 115 families. The same assistance was provided to 500 families in Kalmakanda Upazila. The needs are still enormous and Caritas Mymensingh continues to support those affected. Apurbo Mrong, regional director of Caritas Mymenshingh region, says: “I visited the flood affected areas for two days and came back with tears in my eyes. I spoke to many victims. They couldn't understand how the flood water entered their houses and damaged their food, homes and pets. Many of them are without food. I have seen cows, goats, pigs, dogs die and float on the water. Student furniture and books are hopelessly ruined. Now they are destitute and urgently need support". Purnima Rema, a Catholic woman from Dhthearapara, in the Kamlakanda region of Mymensingh, told Agenzia Fides that she had never seen such floods in her entire life. "I have never had to deal with such severe flooding. In my village, every inch of land is under water. All our villagers are badly damaged. They have lost their homes, crops from stores, their pets, their cultivated land", she said in tears, thanking the donors and Caritas. The floods were triggered on June 15 by heavy rains and waters from the states of Meghalaya and Assam, India, where record-breaking rainfall was recorded. According to a report by Bangladesh's Ministry of Disaster Management, the government has so far allocated 71,000 packages of dry food and about one million water purification tablets to flood victims. The Bangladesh Army is helping the victims directly, but in many places government help has not arrived. (FC/PA) (Agenzia Fides, 24/6/2022) 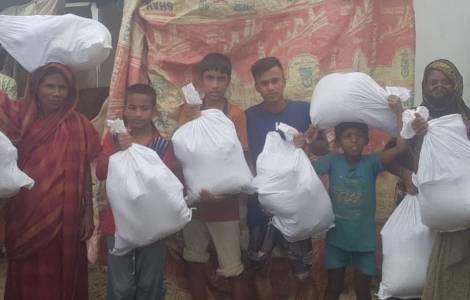