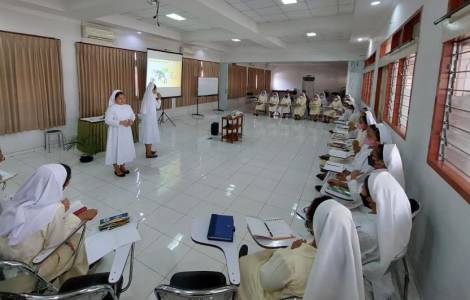 Semarang (Agenzia Fides) - The nuns and all the members of religious institutes in Indonesia are ready to get involved and fight against the social scourge of corruption in everyday life and on a cultural level: this is what the nuns who participated in the recent seminar said in Semarang, in the province of Central Java. Consecrated life in Indonesia intends to contribute to bearing witness, raising awareness and discouraging corruption in the coming years, promoting, in its daily mission, values and practices of integrity and transparency at all levels.
Among the participating nuns, the Franciscan Sisters of Penance and Christian Charity (OSF), Sr. Rosali Prime Hatmani OSF, head of the congregation, told Agenzia Fides that the initiative of this seminar for the young sisters is a crucial formative step to motivate them, from their initial formation, to understand and live these fundamental values in religious life: reliability, authenticity, personal integrity. "This spirit is part of the fundamental Franciscan values", Sr. Rosali told Fides. Sister Lea, from North Sumatra, who had just entered the congregation after living in Malaysia for three years as a migrant worker, says, "In order to get all the travel documents I needed to complete my overseas job application, I was asked to pay a lot of extra money for passports and other travel documents. This extortion could be avoided by living self-discipline on a personal level, she says.
The Spiritual Director, Sr. Vincentine OSF, recognized that such training on personal awareness to adopt the fundamental values of integrity is crucial in the entire Indonesian society. "We also want to thank the Bhumiksara Foundation of Jakarta, which has contributed so that this training on personal integrity is carried out in our religious congregation in Semarang", explains Sr. Vincentine. The Foundation has sent five volunteers: a Jesuit priest, a doctor, a professional motivator and trainer, a psychologist and its director, all of them professionals with practical experience who have not only presented the theory and practice of those values, but also shared their personal experiences, explained by the director of Bhumiksara, Royani Lim. In the Indonesian Catholic Church, initiatives dealing with the issue of corruption, which is widespread in Indonesia, have been gradually introduced into the formation of religious for consecrated life.
In the country, which is devastated by this rampant scourge, both in the public and private sectors, high-level personalities accused of corruption have been arrested. According to the 2021 Corruption Perceptions Index (CPI), prepared by the NGO Transparency International, the nation, with an index of 38, ranks 96th out of 180 countries, in a classification in which countries with the highest index (slightly corrupt) and those with the lowest index (very corrupt) occupy the first positions. (MH/PA) (Agenzia Fides, 22/6/2022) 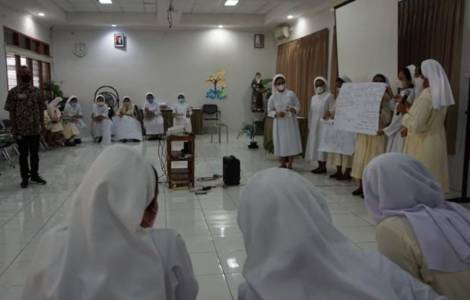