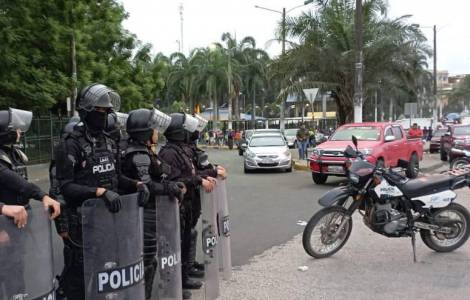 2022-07-19
The dialogue tables start, the Episcopal Conference guarantor of the process

2022-06-24
A truce to start dialogue and get out of the crisis: The bishops offer themselves as observers of the process

Quito (Agenzia Fides) - The government of Ecuador, led by the President of the Republic Guillermo Lasso, has extended the state of emergency from three to six provinces, giving greater powers to the police and restricting freedom of movement. The decision was made following the violent protests and strikes that are spreading in several areas of the country, including the capital Quito.
According to information gathered by Fides, the protests began in the southern area of Ecuador on Monday, June 13, with a strike organized by the Confederation of Indigenous Nationalities of Ecuador (Conaie), which brings together different groups present in the country, where the indigenous represent 25% of the population. The demonstrators accuse the government of not being able to contain inflation, the rise in fuel prices and basic necessities; of not solving the structural problems of the country, such as corruption, the inefficiency of the health system and unemployment; they also demand respect for fundamental rights and the allocation of subsidies to families in difficulty. The government responded by announcing some measures, but these were not considered sufficient by the protesters, who have continued their mobilization. Initially the protests were peaceful and contained, then they spread to other parts of the country, involving non-indigenous people (women, students, trade unionists) and taking on violent connotations with road blocks, damage to vehicles and public buildings, clashes with the police and part of the population opposed to the strike. Some media workers have been attacked. According to human rights organizations, in the first week of mobilization there were 61 injuries, 18 of them seriously injured, and 86 arrests, including that of the president of Conaie, Leonidas Iza, who was detained for one day and released on parole. On Monday 20 the first death was registered, a 22-year-old, for whose death an investigation has been opened. The second death was that of a 40-year-old indigenous man, who died during the clashes on Tuesday 21. The Minister of the Interior has reported that 61 police officers have been injured, 14 have been taken hostage by the protesters, 2 vehicles have destroyed and 21 have been damaged. Two other people are believed to have died because roadblocks prevented the passage of ambulances. The Episcopal Conference of Ecuador has launched an appeal to the national government, to Conaie, to social and political movements, and to all men and women of good will, to "seek together adequate solutions for the path of dialogue, thinking above all in the common good and in the well-being of the poorest of our country". Therefore, they reiterate: "We are not oblivious to the cry of our people who demand better days for all, but we are also aware that this is a path that we must build together." Looking with concern at the current moment, the bishops stress that no agreement can be reached with violence, wherever it comes from and in any form, convinced that "this is not the path we must take if we want to build a better Ecuador".
Quoting Pope Francis, who speaks of a culture of dialogue, of building bridges, of not dividing but uniting, they conclude by reiterating: "As Pastors of this Church, we will continue to walk alongside our people, sharing their difficulties and hopes, moved only by the Gospel of love and truth, of justice and solidarity". In an interview with the Ecuavisa television network, the President of the Bishops' Conference, Archbishop Luis Cabrera of Guayaquil, yesterday reiterated the Church's invitation to the parties in conflict to dialogue: "dialogue is the only reasonable and practical way to reach a solution from which all Ecuadorians benefit". The Archbishop reported that, from some groups, although not officially, the Church has received an invitation to participate in this dialogue table, not essentially as a mediator, and added that the Church is always willing to make its contribution, according to their experience, capacities and possibilities. Regarding the causes of this situation, Bishop Cabrera said that it is "a social malaise that has its roots in extreme poverty, in the lack of the bare minimum to live with dignity, starting with work, health, education, from food… another factor is administrative corruption and finally social insecurity". "It is important that the parties have the will to dialogue, to address the problems and to find solutions that benefit all Ecuadorians and not just particular sectors", the Archbishop reiterated, finally addressing an appeal to the country: "All Ecuadorians are co-responsible for this situation and therefore I appeal to everyone to to be builders of a culture of peace, based on justice, freedom and truth. Let us be builders of bridges and not of walls!". (SL) (Agenzia Fides, 22/6/2022)