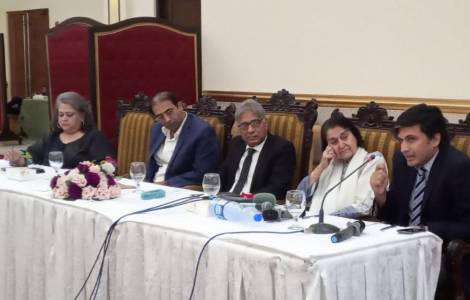 Lahore (Agenzia Fides) - "The federal and provincial governments have implemented very few recommendations of the well-known ruling of the Supreme Court of 19 June 2014 on the rights of religious minorities. This happens because of the lack of good governance, indifference to human rights and the situation of minorities. It is urgent that governments strive to put this decision into practice", Catholic leader Peter Jacob, director of the "Center for Social Justice" (CSJ), told Fides. During a conference on June 18 in Lahore, Jacob noted, "According to the CSJ's findings, a Supreme Court panel conducted 28 follow-up hearings that sent 80 additional orders to the federal and provincial governments to implement the initial orders issued in 2014. Speakers at the conference organized by the CSJ on the occasion of the 8th anniversary of the Court's historic judgment on the rights of minorities regretted that implementation was largely lacking. And they urged the government to comply with directives issued on June 19, 2014 by the then Chief Justice of Pakistan, Tassaduq Hussain Jillani. The rapporteurs also pointed out that the Special Commission set up by the Supreme Court had done a commendable job and submitted 11 reports to the Court, reporting on the activities and challenges related to compliance with the verdict. Nasira Iqbal, a retired judge, said: "It has been eight years since this statement was issued and we are still awaiting its implementation. It is the government's responsibility to enforce court orders and address serious issues faced by minorities in Pakistan. The ruling emphasizes equal rights for all citizens regardless of faith. The government must therefore develop inclusive and tolerant school curricula for all, as ordered by the court".
Saroop Ijaz, leader and secular activist, said: "The directives of this historic judgment had the potential to bring about far-reaching reforms, to contribute to the advancement of religious freedom and the building of a harmonious society. Federal and provincial governments have failed to seize the opportunity to achieve equal rights and respect for ethical and religious diversity in Pakistan". He notes, "This may be due to a lack of political capacity or a lack of institutional will on the part of the government." As pointed out by lawyer Saqib Jillani, the Constitution of Pakistan guarantees fundamental freedoms such as the freedom to profess religion and to lead religious institutions, as well as the right to equality for all citizens without any discrimination. Jillani stressed: "Federal and provincial governments must fulfill their constitutional responsibilities by addressing governance gaps and implementing measures to effectively promote and protect minority rights. Speaking at the conference, Catholic Michelle Chaudhry, President of the Cecil and Iris Chaudhry Foundation, said: "The National Minorities Commission and Minorities Task Force, established by notifications and resolutions in May 2020 and June 2022, were instrumental in portraying full compliance due to the court's provisions, but so far there has been complete disregard for the verdict issued by the court. The Court specifically ordered the executive to establish a National Council for Minorities, to develop a school curriculum aimed at creating peace and harmony in society, to implement the measure of job quotas reserved for members of minorities, to implement measures to reduce hate speech, to organize public initiatives to promote social and religious tolerance and to punish human rights violations against religious minorities. The CSJ has investigated and tracked gaps in the implementation of court orders and produced three assessment reports, entitled: "When Compliance Fails Justice", published in 2016; "A Long Wait for Justice" in 2019 and "Justice Yet Afar" in 2021. (AG/PA) (Agenzia Fides, 20/6/2022)