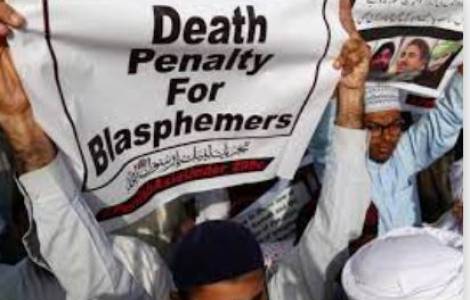 Rawalpindi (Agenzia Fides) - The High Court of Lahore, in its branch of Rawalpindi, has confirmed the death sentence already pronounced in first instance against two Christian brothers, Qaiser Ayub and Amoon Ayub, in a case of blasphemy. The two brothers have been in prison since 2011, when the police registered a case against them on the complaint of a Muslim imam. Both individuals have been charged with committing blasphemy against the Prophet Muhammad under Section 295(C) of the Pakistani Penal Code. As Fides learned, in the appeal judgment issued on June 8, the High Court confirmed the death sentence of the two people, accused of publishing blasphemous material on the Internet. In June 2011, a Muslim man informed police that he was surfing the internet when he came across a blog containing blasphemous material against Islam. The blog also contained the name, phone number, email address and address of the alleged perpetrator. The name given was Qaiser Ayub, the eldest of two Christian brothers. The police filed a complaint against the two brothers and arrested them. Amoon was arrested because the phone number and office address listed on the blog were registered in his name. None of the available information, however, proves that the two brothers actually created or posted the material on the website. The Court of First Instance convicted the two brothers in December 2018, arguing that the presence of the Ayub brothers' contact details on the blasphemous website, and the absence of any attempt by them to approach the website administrator to remove their contact details clearly led to the conclusion that they were responsible for the creation of the website. However, as the lawyers of the European Center for Law and Justice (ECLJ) claim, this is only conjecture, since anyone can create a website and publish the name and address of anybody.
The Court of First Instance ignored the Ayub brothers' testimony that an argument had broken out with Muslim friends before the blog was published. Amoon believes his brother's Muslim friends created the website using the contact details of the two Christians as a form of retaliation, with the aim of trapping and harming them. On February 28, 2022, the High Court opened the appeal. Lawyers pointed out to the court the lack of evidence that the two people wrote or posted blog posts. And the Computer Crimes Department says no information could be found about the author of the blog. According to case law, a person can only be convicted in such cases if it is unequivocally proven that the telephone, computer medium or website was actually used by the accused person. The High Court, however, ignored these arguments and the relevant case law and upheld the death sentence imposed on the two brothers. "This is another step backwards for Pakistan, where religious minorities have been imprisoned and killed on false charges of blasphemy for more than three decades", notes a note sent to Fides by the European Center for Law and Justice (ECLJ). Faced with a case of Christians unjustly sentenced to death for blasphemy, the ECLJ is preparing an appeal to present the case to the Supreme Court of Pakistan. (PA/AG) (Agenzia Fides, 18/6/2022)