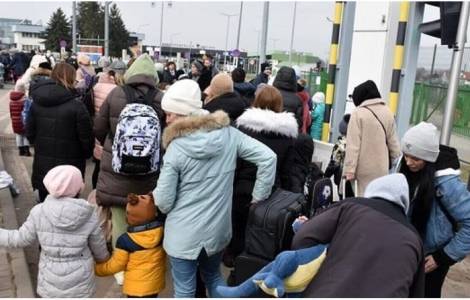 Bologna (Agenzia Fides) - "These are children who, before reaching a safe place, experienced firsthand not only the horrors of war, but also a sudden detachment from their daily life and of their environment. It is very important to be there for them, not only from a material point of view, but also from an emotional point of view". This is what Father Giampaolo Cavalli affirms in an interview with Agenzia Fides, director of the Antoniano Institute in Bologna which, since the beginning of the war in Ukraine, has been active in supporting people fleeing war, offering both material aid and emotional and psychological support through the Therapeutic Center and the Listening Center run by the Friars Minor. "The Ukrainian children who arrive in Italy, he continues, have experienced a trauma in the trauma. We cannot erase what they have seen and experienced, but we must do everything in our power to help them overcome the horror to which they have been forced, which is why Antoniano, with the "Operation Pane" network, and thanks to the precious help of its volunteers and specialized operators, is at their side to support them in so many of needs". According to data published by Unicef, three months after the start of the conflict in Ukraine, around 7.5 million children are in danger and more than 40,000 of them have found refuge in Italy. Among the initiatives set up to support the Ukrainian emergency, the Antoniano Therapeutic Center, which since 1981 has been dealing with rehabilitation, well-being and prevention paths for children of developing age, recently organized in Bologna a day dedicated to Ukrainian families and children who have arrived in recent months with visits from multi-professional rehabilitation specialists. "To facilitate communication with children and mothers, says Father Giampaolo, the doctors and operators of the therapeutic center have created communication boards in symbols and in Italian-Ukrainian, useful for overcoming language barriers and establishing a direct dialogue during the visits. Indeed, the Antoniano is working on setting up workshops for Ukrainian children, including those with disabilities, designed precisely to help them overcome trauma. "Art Therapy" will put the emotional aspect in a graphic and material space. "To manage a post-traumatic disorder, explains the director of the Antoniano, art, music and movement can access the emotional component of a delicate and gradual way, allowing a re-elaboration of the experiences and a reduction of the state of activation". Meanwhile, the work of the Friars Minor in favor of the most needy continues throughout Italy and in Ukraine: "Antoniano - Father Giampaolo Cavalli told Fides - has been active since the beginning of the war to support people fleeing to Italy and to provide support to Ukraine and the borders. In particular, it supports several Franciscan structures in Ukraine, in Konotop, Odessa and kyiv, as well as a structure in Romania which is committed to offering support to mothers and children who cross the border of Ukraine, not only with primary aid but also with concrete support to integrate and enter the world of work, starting with the teaching of the Romanian language". "In Italy - continues the Franciscan - in addition to having activated the services of reception, food support, formation, integration and emotional support in Bologna through the solidarity network of Operation Pane, we support other Franciscan places involved in welcoming Ukrainians fleeing the war, such as the convent of Bordighera and that of Montenero, in the province of Imperia. From Bologna to Palermo", he concludes, "more than a hundred women and children have already been reached through the Operation Pane network, receiving hospitality in the structures of the Franciscan Friars: from meals to basic necessities such as medicines, clothing and linen". (ES/PA) (Agenzia Fides, 18/6/2022)