AFRICA/DR CONGO - Bishop Kimbeni, newly elected in Kisantu: "The population is united and close to the Holy Father" 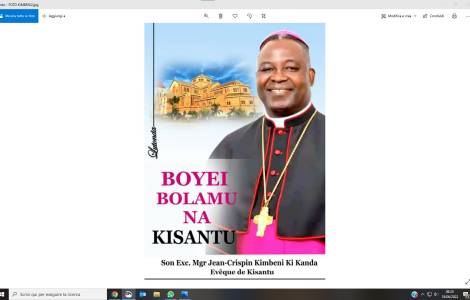 Kinshasa (Agenzia Fides) - "I never imagined leaving Kinshasa so soon, I have missed this archdiocese for so many years. Coming back here in September 2020 was a great joy, to work there even more". These are the words of Bishop Jean-Crispin Kimbeni Ki Kanda, appointed Bishop of the diocese of Kisantu on June 11, 2022 (see Fides, 13/6/2022). Reached by Fides, Bishop Kimbeni, currently Auxiliary Bishop of Kinshasa, expressed his gratitude and surprise.
"I was elected auxiliary Bishop of Kinshasa on June 29, 2020 and consecrated on October 10 of the same year - he wrote. On June 11, the Holy Father appointed me Diocesan Bishop of Kisantu. Thus, 20 months have passed since I began my episcopal ministry. During these months the pastoral work has been intense and abundant. Kinshasa is a difficult megalopolis. The Archbishop, Cardinal Fridolin Ambongo, entrusted me with two important, demanding and arduous tasks: consecrated life and administration. I must say that it has been a great experience, as well as a rich and enriching experience alongside the Cardinal and in collaboration with the other Auxiliary Bishops, at the beginning there were four of us, then we were three". Bishop Kimbeni, who was an official of the Congregation for the Evangelization of Peoples, welcomed this new mission with joy and astonishment. "It is true that Kinshasa is my diocese of incardination, but I had to readjust after my curial past in Rome, for 18 good years. It was still not easy, but overall I got quickly readjusted. My move to the diocese of Kisantu is a surprise for me and it fills me with joy. I always try to consider the will of God and not my own. I am grateful to the Lord for his presence in my life. I am also grateful to the Holy Father, Pope Francis, for his interest in the particular church of Kisantu and his confidence in me. I am confident that the new mission, albeit with many challenges, will go well with the help of the Lord and the commitment of the faithful of Kisantu: priests, consecrated persons and laity". And he added: "I have no particular objectives at the moment. I will take canonical possession of the see on August 6. And after that, I will start touring the diocese. In this way, I will try to identify the needs of the diocese and together, with everyone and the close collaborators, we will identify and indicate the pastoral solutions to be brought in a synodal way. The challenges are many from what I have heard unofficially since I am still not on the spot. There are those which are common to the young churches: the insufficiency of apostolic personnel and means for pastoral care, the immensity of the territory, certain practices linked to traditions which have not yet been evangelized". "From what I have been able to observe, since the day of the announcement of my appointment as Bishop of Kisantu, he notes, there have been expressions of joy among the people of God, the clergy, the world of consecrated life and the laity, especially young people. I have received many calls of congratulations and encouragement. And you can feel that the people of God are eager to see me there. The Church of Kisantu welcomes me with great joy and enthusiasm. Some have already printed posters with my photo, the image of the cathedral church and the words "greetings and welcome". We asked Bishop Kimbeni how the diocese of Kisantu is involved in the upcoming synod convened by Pope Francis. "I know that the church of Kisantu, like all the other particular churches in the country, is involved in the synodal journey announced by Pope Francis. As soon as I take possession of the Diocese, I will visit the conclusions of this process wisely followed by Cardinal Fridolin Ambongo as Apostolic Administrator" . Concluding the interview, Bishop Kimbeni expressed his opinion on the postponement of the Pope's trip scheduled for early July. "At the news of the postponement of the Holy Father's trip, the Congolese population, not just Catholics, was very disappointed. The reason is that many thought that the trip was really canceled, suppressed, but after some explanatory and clarifying interventions made by the Apostolic Nuncio, Monsignor Ettore Balestrero, Cardinal Fridolin Ambongo, Archbishop of Kinshasa, as well as by Monsignor Marcel Utembi, Archbishop of Kisangani and President of the Episcopal Conference of Congo (CENCO), and the other Bishops in their respective dioceses, people understood that the visit was only postponed. The population is united and close to the Holy Father, praying strongly for his speedy recovery. The people of the Democratic Republic of the Congo remain faithful in prayer (Romans 12:12), knowing that nothing will be impossible for God (Luke 1:37)". (CK/AP) (Agenzia Fides, 18/6/2022) 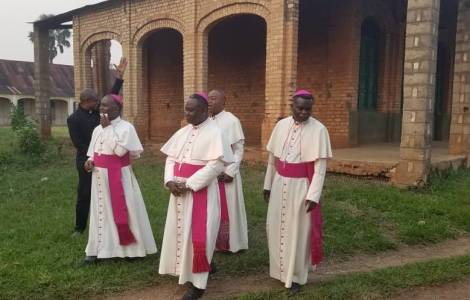