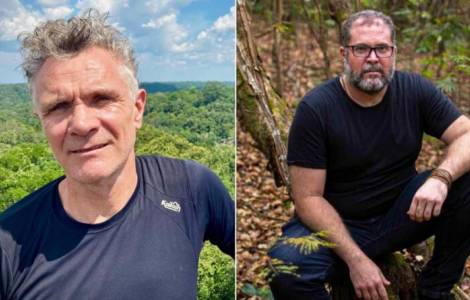 Brasilia (Agenzia Fides) - British environmental journalist Dom Phillips and Brazilian anthropologist Bruno Araújo Pereira, a specialist in indigenous issues, have been missing in the jungle on the border with Peru since June 5. During the search by the navy, army and local security forces, a fisherman, known as Pelado, was arrested and questioned. He confessed to the murder and also indicated where he buried the bodies. The motive for the crime was illegal fishing in the Amazon region, which the two men were documenting. The National Conference of Bishops of Brazil (CNBB) expressed its solidarity with the two families, awaiting clarification of what happened and full justice. "We cannot accept - they write in the note sent to Fides - the aggression against human beings, the lack of respect for the environment and our common home, nor the cover-up of truth and justice". The Bishops underline that "these deaths are part of the list of tragedies experienced in the Amazon region, as well expressed by Pope Francis in the post-synodal apostolic exhortation Querida Amazonia" and reiterate: "Faithful to the Successor of Peter, we reaffirm the dreams expressed for the region, by Pope Francis in his exhortation".
The Pan-Amazonian Ecclesial Network (REPAM-Brazil) also published the note "No to the deaths and the degradation of the Amazon", in which it calls on public authorities to act urgently. The Network expresses its solidarity with the families of the victims and thanks the indigenous peoples of the Javari Valley "for their solidarity, their human sensitivity and their gratitude towards those who support their struggles", appreciating the commitment of journalism "in favor of the rights of man and Amazonian causes". REPAM Brazil is also outraged over the continuing deaths of indigenous leaders, ribeirinhas and quilombolas, as well as the violation of human rights in the biome, and calls for "vigorous action by the authorities to end to the illegality and exploitation of nature in the Amazon, which have caused constant deaths". The Indigenous Missionary Council (CIM) welcomed "with great sadness and deep indignation the news of the assassination", expressing its solidarity with the families and friends of Bruno and Dom: "Both have always acted with conviction to defend the life and rights of indigenous peoples, and this determination has earned them genuine recognition and extraordinary esteem on the part of indigenous peoples, their allies and all people of good will. He then expressed his support for indigenous peoples of Javari and the Javari Valley (Univaja), "who devoted themselves with all their strength and knowledge to the search for Bruno and Dom and who were also the target of lies and accusations by the federal authorities".
Cimi calls for a thorough investigation of this matter, including political responsibility, and condemns the "systematic inaction of the Brazilian government and its anti-indigenous policy" which encourages invaders of indigenous lands to act freely, with the certainty of impunity. It is essential that the Brazilian State immediately resume its policy of protecting the lives and territories of indigenous peoples", reiterates Cimi, which calls for a reaction from all of Brazilian society: "We cannot remain indifferent abandonment of state action, encouragement of violence, impunity, neglect and omission". (SL) (Agenzia Fides, 17/6/2022)

ASIA/PAKISTAN - The appeal of civil society to the government: Do not teach hatred towards minorities at school