AFRICA/SOMALIA - Serving the Somali people and the entire country: among the first objectives of the newly appointed Prime Minister 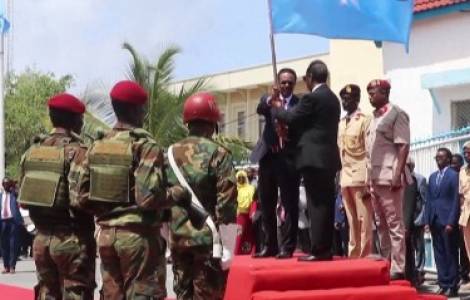 Mogadishu (Agenzia Fides) - "We have a lot of hope, a large part of Somalia welcomed the news. The choice of the President of Somalia Hassan Sheikh Mohamud fell on one of his personal friends, Hamza Abdi Barre." This is what an institutional source from Mogadishu told Fides, commenting on the appointment of the new Prime Minister of the Federal Government of Somalia. "The fact that he is very close to the president, he continues, and that he was chosen by him, gives us a lot of hope because we no longer know the struggles of the former government between the president and the first minister, who were creating so much chaos". Barre is 48 years old and represents the new generation of Somalis." The PM's appointment comes after a bitter disagreement between former President Mohamed Abdullahi Mohamed, who tried to extend his presidency, and former Prime Minister Mohamed Hussein Roble, with the security forces split into factions supporting one of the two men. This rivalry has caused firefights between the various security organs and diverted them from the fight against Al Shabaab militants, linked to Al Qaeda, who control large parts of the country and have killed tens of thousands of people in attacks. The political crisis has also diverted attention from a growing humanitarian emergency that is forcing more than six million Somalis to depend on food aid. "First, I will form a worthy new government that will serve the Somali people and the country after gaining the approval of the People's House", Barre said. The new prime minister is from the Ogaden clan, a region of Ethiopia that is part of the country's Somali region, and is seen as a close ally of Jubbaland state president Ahmed Madobe. On the news of his appointment, Somalis from the area where the new minister is from, who live in Nairobi, also staged big celebrations in the streets. According to recent figures released by UNICEF, some 386,000 children in Somalia are in desperate need of treatment for severe acute malnutrition which threatens their survival. Etienne Peterschmitt, FAO Representative in Somalia, pointed out that according to the latest food security analysis, of the 7.1 million people in food crisis, about 2.1 million are in the emergency stage of very high acute malnutrition, with increasing levels of mortality among children and adults. In addition, the number of people in the so-called "disaster phase", characterized by extreme food shortages, has risen to around 213,000. Mr. Barre, who is married with eight children, was educated in Yemen and Malaysia. He also headed the local election management body in Jubbaland and held various advisory roles in government. He is currently a member of the Lower House representing Kismayu from Jubbaland State, the southernmost region of Somalia, and is the 21st Prime Minister of Somalia. (AP/GF) (Agenzia Fides, 17/6/2022)