AMERICA - The Bishops of Central America: "We hear the cry of the Nicaraguan people and we are saddened by the situation they are going through" 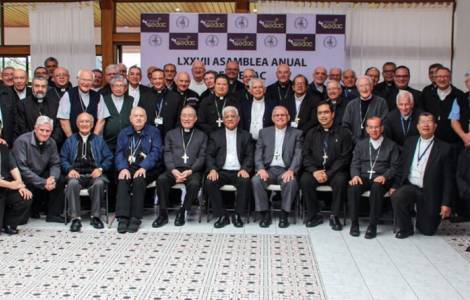 San Salvador (Agenzia Fides) - On the solemnity of Corpus Domini, June 16, the Episcopal Secretariat of Central America (Sedac) published a statement of solidarity with the Church of Nicaragua, with "all the Bishops, priests, religious communities and lay people of this sister country who work diligently in the Lord's vineyard, despite the difficulties and trials they encounter on their way". In particular, the message, sent to Fides, mentions Monsignor Rolando Álvarez, Bishop of the Diocese of Matagalpa and Apostolic Administrator of the Diocese of Estelí, and Priest Harving Padilla, parish priest of San Juan Bautista in the town of Masaya, " who suffer from the violation of their right to security and full freedom" (see Fides 23,24,30/5/2022). The text signed by the President and Secretary General of Sedac, respectively Monsignor José Luis Escobar Alas and Cardinal Gregorio Rosa Chavez, reiterates: "We hear the cry of the Nicaraguan people and we are saddened by the social, economic and political situation they are going through, which causes their pain and suffering". Aware that the Nicaraguan people aspire" to a full and happy life", corresponding to the dignity that God has given to each one, "we unite our prayers with those of the Church of Nicaragua, asking God for understanding, tolerance, dialogue, unity and peace". The message invites civil and military authorities "to seek and pursue the paths of dialogue that make possible harmonious coexistence between citizens and the institutions that constitute the structure of society, including the Church, which for five centuries has looked upon this people with love". He then cited the example of Monsignor Antonio de Valdimieso, who was killed in 1550 "to defend the victims of the colonial system of government". The Spanish Antonio de Valdivieso, a Dominican, was appointed Bishop of Nicaragua and Costa Rica on February 29, 1544. His concerns about the living conditions of the population and the abuses of the colonial system aroused the ire of the governor, who slandered him to the point of inciting an angry mob, which went to his home and stabbed him to death on February 26, 1549. He is considered America's protomartyr for defending the rights of indigenous peoples. "On the solemnity of Corpus Christi, the message concludes, knowing the faith, love and devotion of our peoples, including that of Nicaragua, let us ask Our Lord Jesus that national unity may be achieved through his Body and Blood, much desired and necessary in Nicaragua". (SL) (Agenzia Fides, 17/6/2022)