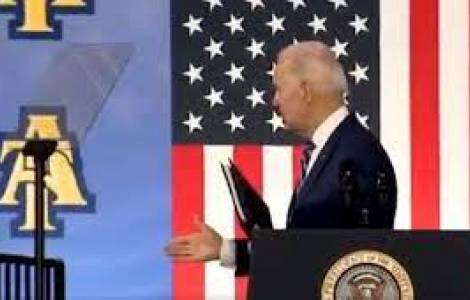 Jerusalem (Agenzia Fides) - US President Joe Biden will travel to the Middle East from July 13 to 16, where he will visit Israel, Palestine and Saudi Arabia. The announcement of the US President's visit has drawn the attention of several senior representatives of the Churches and ecclesial communities of the Holy Land, at a time of growing unease at the trials, events and intimidations which, especially in Jerusalem, disrupt the fragile balance of coexistence between different communities of faith, codified in the customary rules of the so-called "Status Quo". The expectations and considerations of Christian representatives regarding Biden's announced visit were outlined in some interventions relaunched by press organs such as the Jordanian newspaper Ad-Dustour.
Commenting on President Biden's planned trip to the Middle East, the Greek Orthodox Patriarch of Jerusalem, Theophilos III, recalled that the strategies pursued by Israeli extremist groups have long pressured the ordinary life of local Christian communities. The impact of these intimidating strategies - the Patriarch hoped - could at least be mitigated if the nations of the world, and in particular the USA, concretely demonstrated their distancing from Israeli extremist organizations. "We hope that President Biden's visit," remarked Thephilos, "will encourage the search for solutions to the emergencies facing Palestinians, Christians and Muslims, including violations against churches and monasteries perpetrated by extremist groups, in the silence of the official Israeli authorities". King Abdullah II of Jordan and the Hashemite Dynasty - added the Patriarch - undertake with dedication their role as guarantors and protectors of the Christian and Islamic Holy Places of Jerusalem, but they cannot be left alone in their commitment to avoid any alteration by political and military means of the factors and customs that determine the delicate multi-ethnic and multi-religious coexistence in the Holy City. Archbishop Yasser Ayyash, Patriarchal Vicar of the Melkite Greek Catholic Church for Jerusalem, hoped that President Biden would also include on the agenda of his visit to Israel the issue of intimidation perpetrated by extremist groups against institutions and Christian realities in the Holy Land. A phenomenon that contributes to increasing the exodus of Christians from the Holy Land to Western countries, despite the efforts made by local communities to support families and individuals in difficulty and thus try to stem the migratory flow, to avoid the progressive dissipation of the Christian presence in the city where Jesus died and rose again.
Hosam Naoum, Archbishop of the Anglican Church of Jerusalem, Jordan and the Middle East, also recalled that the Council of Patriarchs and Heads of Churches in Jerusalem has been working for years to raise awareness in the international community of the pitfalls endangering the Christian presence in Jerusalem and throughout the Holy Land. On Friday June 10, Hadi Amr, the US State Department official in charge of the Israeli-Palestinian file, had met Patriarch Theophilos who, on behalf of the Patriarchs and Heads of Churches of Jerusalem, had presented him with data and considerations on the structural and conjunctural factors, processes and events that weigh negatively on the ordinary life of local Christian communities. Announcing Mr. Biden's upcoming visit to the Middle East, White House spokeswoman Karine Jean-Pierre noted that this tour will be an opportunity to reiterate Washington's support for Israel's security and prosperity. The US President will also meet with the leaders of the Palestinian National Authority and, on this occasion - added the spokesperson - will be able to confirm "Washington's support for a two-state solution guaranteeing security, freedom and equality. opportunities for the Palestinian people". During his stopover in Saudi Arabia, Mr. Biden will also meet in Jeddah the leaders of this country which "for 80 years", noted the spokesperson for the White House - has been a key strategic partner for the United States". (GV) (Agenzia Fides, 15/6/2022)