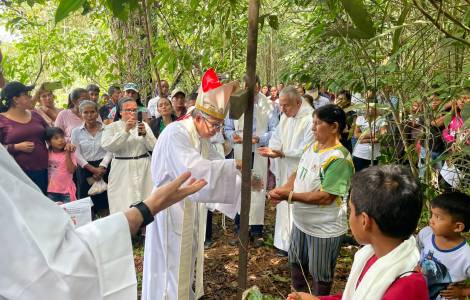 Puerto Leguizamo (Agenzia Fides) - "Walking together allowed us to listen with patience and sincerity to the communities and their institutions. It was a safe space in which, as pastors, we welcomed the cries and encouraged us in hope; we celebrated the faith with everyone, valuing the strength of the symbolic elements of these ancestral cultures; we came to know and recognize the face of a Church that advances in the Amazon overcoming fears and apprehensions, worthy of the hour it is given to live".
These words sum up the visit that, under the sign of synodality and closeness to these peoples, the executive of the Episcopal Conference of Colombia, headed by the President, Monsignor Luis José Rueda Aparicio, Archbishop of Bogotá, made from 9 to 11 June in the territories of the Apostolic Vicariate of Puerto Leguízamo-Solano, where the borders of three sister nations converge: Colombia, Peru and Brazil. In the final press release, sent to Agenzia Fides, it is highlighted that listening and discernment with pastors, priests, religious men and women, catechists, missionary teams, social organizations and ancestral communities, highlighted the urgency of making an appeal to those who have government responsibilities in public matters to "stop the violent deaths, disappearances, threats and displacements that mainly affect indigenous, peasant and Afro-descendant communities".
The illicit cultivation of this territory attracts illegal armed groups, which has contributed to the climate of insecurity and the lack of protection for the inhabitants. They therefore call, first and foremost, on national government authorities to summon all the forces and organizations active in this field in order to explore short, medium and long-term solutions. They ask the armed protagonists to "respect the sacred gift of life before any profit or advantage... nothing justifies the drama of war". They remind all Colombian citizens that "the protection of creation, which is our common home, cannot become a reality if we continue to destroy life". Indigenous, peasant and Afro-descendant communities, despite the abuses caused by mining and the looting of these territories, have ensured that we can continue to enjoy extraordinary biological and cultural diversity. "The cry of the Amazon, they conclude, is that we seriously consider a less aggressive and polluting production, an effort for a more equitable distribution of goods and a culture of responsible consumption. Monsignor Luis José Rueda Aparicio, Archbishop of Bogotá and President of the Episcopal Conference of Colombia (CEB); Monsignor Omar Alberto Sánchez Cubillos, Archbishop of Popayán and Vice-President of the CEB; Monsignor Joaquín Humberto Pinzón Güiza, Bishop of the Vicariate of Puerto Leguízamo-Solano; Monsignor Luis Albeiro Maldonado Monsalve, Bishop of the Diocese of Mocoa-Sibundoy; Father Rafael Martín Castillo, director of the National Secretariat for Social Pastoral-Caritas Colombia; Juan Felipe Martínez, coordinator of REPAM Colombia and the missionary team of the Vicariate participated in this visit. (SL) (Agenzia Fides, 14/6/2022)