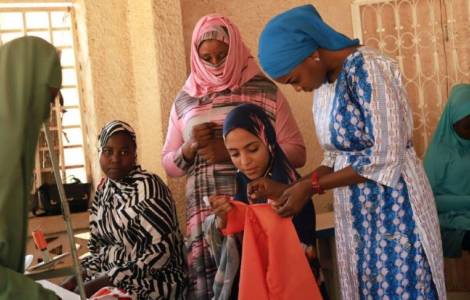 Niamey (Agenzia Fides) - "The school is an effective means to eliminate early and forced marriages, and to spread family planning, freely chosen by the couple, and not imposed by tradition", reads a note sent to the Fides Agency by Fr. Marco Prada. "Parents often complain that a girl kept at home to attend school is one more mouth to feed - continues the priest of the African Mission Society -. To deal with this problem, the French high school in Niamey, as well as many other high schools in the Nigerien capital, have created boarding schools, where girls find accommodation and food, as well as a welcoming and supportive environment. The initiative offers a hundred girls, born in poor and disadvantaged families, especially in the interior of the country, the opportunity to enroll and attend educational centers. "The educational project responds to the aspirations of the President of Niger, Mohamed Bazoum, who has placed education among the priorities of his mandate," added Fr. Prada. "Among the government's objectives is above all the schooling of girls. Parents prefer to marry them at 15 years of age. In fact, 77% of Nigerien girls are married before the age of 18, and 28% before the age of 15. And so, Niger has for years been the country with the highest birth rate in the world: 6 children on average per woman. "When you fight for the emancipation of women, our chauvinist and conservative society immediately denounces you as being at the service of Western culture and its values, which conflict with Islam. We are accused of ruining the traditional values of Niger", says Nafissatou Hassane Alfari, director of an association for the promotion of women in Nigerien society. In fact, even the jihadists, the Muslim extremists, have understood the power of change that schools represent and that is why when they attack villages, the school is always among the infrastructure they destroy. Hadiza Maiga, who has created a sewing school, is responsible for welcoming girls who had to drop out of school because they were forced to marry by jihadists and undergo genital mutilation. "These girls managed to escape. They cannot go back to their families in the village, because they would be rejected. Hadiza welcomes them, gives them a home and the opportunity to learn a job and create a new life for themselves independently and responsibly". In Father Prada's account we also read of a university professor who directs a program to combat radicalization and violent extremism. "Professor Moulaye Hassane is concerned about the growing influence of Wahhabi fundamentalism, sponsored by the countries of the Arabian Peninsula, which has imposed new rules of life that especially penalize women. Wahhabi preachers regard women's promotion associations as smoke in their eyes, and in their sermons accuse them of undermining the foundations of the Islamic religion". (MP/AP) (Agenzia Fides, 14/6/2022)