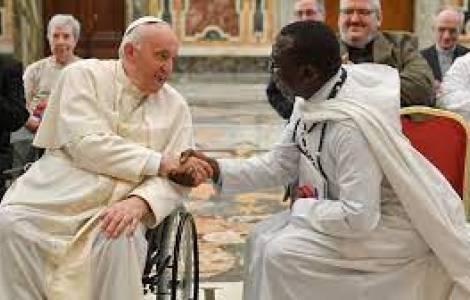 Rome (Agenzia Fides) - The joy of proclaiming the Gospel always shines against the background of a grateful memory. And even the gift of self-giving that is expressed in every apostolic and missionary work can never be obtained as a result of reasoning or calculation, but can only arise as a reflection of gratitude. This is what Pope Francis suggested during the meeting on Monday, June 13 to the participants in the General Chapter of the Missionaries of Africa (also known as the "White Fathers"), dedicated to the theme "mission as prophetic witness". "I was very pleased" the Pope emphasized at the opening of his speech "to hear that you have lived these days “with gratitude” and “with hope”. This is very good. Looking at the past with gratitude is a sign of good spiritual health; it is the “deuteronomic” attitude that God taught his people". This gratitude - continued the Pope - is what nurtures the flame of hope. And "those who do not thank God for the gifts he has sown along the way – albeit tiring and at times painful – does not even have a hopeful heart, open to the surprises of God and trusting in his providence". In particular, this spiritual attitude is decisive to allow to mature "the seedlings of the vocation that the Lord inspires with his Spirit and his Word. A community in which one knows how to say “thank you” to God and to one’s brothers, and in which one helps the other to hope in the Risen Lord, is a community that attracts and sustains those who are called to it".
In the horizon of gratitude and hope, Pope Francis placed the subsequent considerations offered to the White Fathers regarding the theme of the General Chapter and their fidelity to the "charism that the Spirit entrusted to Cardinal Lavigerie" (Charles Lavigerie, founder of the Missionary Society of 'Africa, 1825-1892, ed). "Be apostles, none others but apostles!" was the exhortation that Cardinal Lavigerie repeated to the members of the missionary society he started. "He is the apostle of Jesus Christ", the Pope remarked, recalling the exhortation that the founder used to repeat, he is not one who proselytizes. Evangelical proclamation has nothing to do with proselytism. If at any point one of you finds himself proselytizing, please, stop, convert, and then continue. Proclamation is another thing. The apostle is not a manager, he is not a learned lecturer, he is not an IT wizard, the apostle is a witness. This applies always and everywhere in the Church, but it applies especially to those who, like you, are often required to live in mission of contexts of first evangelization or where the Islamic religion is prevalent".
After repeating the genetic distance that separates the proclamation of the Gospel from any form of political or religious cultural proselytism, the Pope also suggested which are the proper traits that characterize being witnesses of Christ: "Witness" said the Bishop of Rome "essentially means two things: prayer and fraternity. A heart open to God and open to brothers and sisters. First of all, to be in the presence of God, to let oneself be looked at by him, every day, in adoration". Every authentic and fruitful missionary work is not an expression of activism in permanent mobilization, a commitment animated by a dedication to a just cause, but finds its only source "in that 'abiding in Him', in Christ, which is the condition for being apostles. It is the paradox of the mission: you can go only if you stay. If you are not capable of abiding in the Lord, you cannot go". This dynamic that springs from every authentic missionary adventure – the Successor of Peter pointed out – was also present in the life of Saint Charles de Foucauld, recently proposed to the veneration of the universal Church. "Prayer and fraternity: the Church", continued the Pope, must return to this essential core, this radiant simplicity, naturally not in a uniform way, but in the variety of her charisms, ministries, and institutions; but everything must allow this original core, which goes back to the Pentecost and the first community, described in the Acts of the Apostles to shine through". From this "core" - Pope Francis suggested - the gift of prophecy can radiate freely, not only as an individual reality, entrusted to single people, but also as a community experience, which can be experienced in the small communities of the Missionaries of Africa called to live in contexts "where often, besides poverty, one experiences insecurity and precariousness are experienced".
It is precisely in these contexts - the Pope reminded the White Fathers - where you are sent to experience the sweet joy of evangelizing. Saint Paul VI uses this word in his Evangelii nuntiandi. Evangelizing is the mission of the Church, evangelizing is the joy of the Church. Incidentally- the Pope added - take Evangelii nuntiandi, which is still effective today, and it will give you many, many insights for reflection and mission. With you I thank the Lord for this tremendous gift of evangelization".
At the beginning of his speech before the General Chapter of the Missionaries of Africa, Pope Francis had confided his "great regret" for having had to postpone his planned trip to Congo and South Sudan. "Indeed", the Pope said "at my age it is not so easy to go on a mission! But your prayers and example give me courage, and I am confident that I will be able to visit these peoples, whom I carry in my heart". On Sunday, July 3 - added the Bishop of Rome - "I will try to celebrate Mass with the Congolese community in Rome … The day I should have celebrated in Kinshasa. We will bring Kinshasa to Saint Peter’s, and there we will celebrate with all the Roman Congolese people – there are many of them!" (GV) (Agenzia Fides, 14/6/2022)

AMERICA/NICARAGUA - The Bishop of Matagalpa invites a "Crusade of prayer for our Church, our priests, our beloved Nicaragua"