AFRICA/SOMALIA - Conflict of cultures, drought emergency and insecurity among the main challenges of the new government 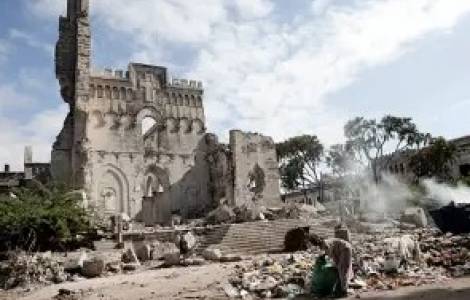 Mogadishu (Agenzia Fides) - "In general, Somalis today are very optimistic. After all, these elections were not without difficulties", said Prof. Ali Abdullahi Warsame, former Health and Environment Minister of the Somali state of Puntland, on the inauguration of the new government in the country (see Fides, 9/6/2022). It was a historic day for Somalia. The inauguration of the new President Hassan Sheikh Mohamud, who was elected on May 15, 2022, was a historic day for Somalia. In the coming weeks he will appoint a prime minister who will form a government.
"In the past two years, the country has gone through a transition process. The elections have been delayed," continues Warsame, who is also President of the Board of Directors at Addoun University. "It has taken us about two years to get to this point. However, it was an election that was very peaceful, so that a smooth transition also took place. Mohamud is the only person to have been elected President of Somalia twice. He is a very experienced, highly qualified individual and we believe he can lead the country towards stability, peace and development".
"Among the many challenges facing the new government is the severe drought that is affecting the whole country. The rainy season has not materialized for two years, and it hasn't rained again this year. The lives of the people who depend so much on breeding and livestock, are at risk. Livestock farming is the economic backbone of our country and accounts for more than 70 percent of our income," emphasizes Prof. Warsame. Due to the effects of climate change, the country is affected by severe and severe malnutrition, especially among children, breastfeeding women and the most marginalized communities, including pastoralists and internally displaced people across the country. "Another major challenge," said the university professor, "for the Somali government is the issue of security. The al-Shabab militias still control a large part of the country, particularly in the south. The issue of Somaliland, which has existed since the outbreak of the Somali civil war in 1991 is another obstacle to overcome. Somalis believe that it is part of Somalia. Therefore, peaceful negotiations between Somalia and Somaliland are urgently needed". "Being part of the larger Horn of Africa region, we face all the issues that the rest of the region faces, most notably the instability in Ethiopia and the drought in eastern Kenya", he explains. "Ethiopia is a very important nation for us. It is a neighboring nation. One of its regional states is ethnically Somali. The conflict that erupted last year has created great insecurity throughout the region and we all hope for a peaceful solution to the conflict problem, hoping that peaceful negotiations will soon take place between Tigray province and the federal government of Ethiopia. Elections will soon be held in Kenya, on the other hand, and we hope for a smooth transition of power and peaceful elections there too. Everything that happens in the region, affects our economic security and prosperity". With regard to the Ukraine crisis, Prof. Warsame emphasizes that Somalia is also affected: "We are very concerned about this situation, which has already hit us hard economically. Like many other countries in Africa and the Middle East, Somalia imports 80 percent of its domestic grain needs from Ukraine and Russia. Of which 50% from Ukraine. As a result, the price of wheat has risen sharply. We also share the suffering of the innocent people there. We have memories of the war and understand well what it means, to flee your own country and be a refugee in other countries of the world". On the subject of culture, the university lecturer emphasizes the special importance of culture in the life of the Somalis. "Culture connects people," he emphasizes in this context, "through culture we can create peace and stability because culture narrows the gap between people's minds and different ways of thinking. It can bring perceptions closer together and help to shape thought to realize a peaceful and better world. I think this is a neglected area, even in the academic environment. Our university focuses on this topic and is interested in creating channels and connections with other international institutions on this topic, be it Universities, research institutes or other organizations What we see now in the world is a great conflict of cultures. So when you talk about and work towards sustainable peace and stability, you essentially have to talk about culture and mutual respect between cultures". (AP/GF) (Agenzia Fides, 13/6/2022)