AFRICA/ETHIOPIA - Missionary: "Ethiopia is a proud country with a great Christian tradition" 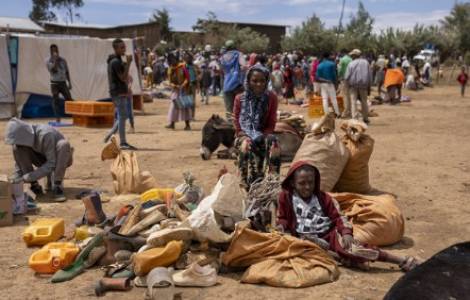 2022-07-26
The siege in Tigray continues, the heparch of Adigrat calls for immediate action

2022-07-12
Despair, illness, death: an existential threat to the people of Tigray. Appeal from the Diocesan Catholic Secretariat of Adigrat

2022-07-05
There, where everything is concentrated in the mystical presence of the risen Jesus

Addis Ababa (Agenzia Fides) - "Great hopes shattered in the last two years by armed clashes sparked by an internal struggle between the Ethiopian government led by Nobel Peace Prize winner President Abiy and the Tigray ethnic group in the north. In addition Covid-19 has also weakened the health system and caused health indicators to deteriorate, and finally the drought that has dried up large parts of the south and led to widespread famine," says Father Dante Carraro, director of Doctors with Africa CUAMM, who speaks of "a distant war" that "no one talks about anymore". "A few months ago," continues the missionary, who is also a surgeon, "there was the crisis in Ukraine, in which we as Cuamm are also providing concrete assistance, with its devastating and bloody effects. It is penetrating all over the country and hitting consumer products and food. Ethiopia is a large country, with nearly 120 million inhabitants and 88 ethnic groups. A proud and wealthy country with a growing GDP and a well-established and widespread Coptic-Orthodox majority Christian tradition.The capital Addis Ababa has an airport that acts as a hub for all of Africa. An overground commuter train, a major ring road, the seat of the African Union, buildings under construction everywhere. But it is always the poorest who pay. 75% of the grain Ethiopia needs comes from Ukraine and that grain is not there now. The price of diesel per liter has doubled and in July they announced that it will increase fourfold. Inflation is galloping, the birr, the national currency, is losing value every day, and poverty is increasing. Wages are no longer enough to make ends meet, and hospitals are struggling. Also the ones in Wolisso. Medicines, transport, diesel for the generator, equipment, laboratory tests, medical supplies cost more there and the financial balance sheet is becoming increasingly difficult". The CUAMM director does not hide his fears and concerns. "This is the war in Ukraine from Africa's point of view. We need everyone's help so that the poorest don't have to pay the price of the war again. In Wolisso, Ethiopia and all of Africa, the need is great. And there is the hospital in Wolisso, which we want to present to Pope Francis together with the hospitals in Central Africa and South Sudan. We will do this from July 5th to 7th when he visits South Sudan, where above all we will also welcome him as a prophet of peace." . "It will be a moment of celebration - the missionary insists - but above all a moment of commitment, of resistance, to give a voice to those who have no voice, to denounce the wickedness of war and its consequences, even if they are far away and to reaffirm our tenacity in building peace and a future. Fruit of a daily life of solidarity and closeness to the poorest in Africa". (AP/DC) (Agenzia Fides, 10/6/2022)