AMERICA - Consecrated Life must be the sower, cultivator and harvester of a new way of being Church 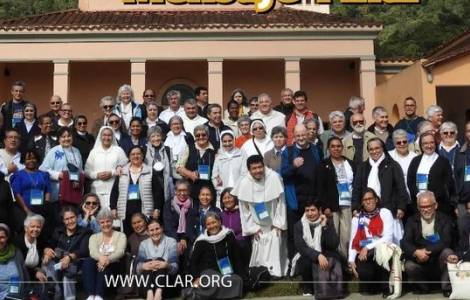 Guatapé (Agenzia Fides) - "It was a beautiful occasion to pray together to the God of the ‘call’ and reconfirm that Consecrated Life is a prophetic vanguard and an expansive gift. Let us return to each of our countries to live joyfully in our generous dedication, this gift that we felt like an Easter dew". This is how the religious men and women of Latin America and the Caribbean write, gathered on behalf of 22 national Conferences at the XXI General Assembly of CLAR, the Latin American Confederation of Religious, held from June 1 to 4 at the Benedictine Monastery of Guatapé (Colombia). In the final message, sent to Fides, the Latin American religious underlined that "these days of encounter were unique, to listen to each other, to seek God's will and to listen to the invitations that the Holy Spirit makes us ... we opened our ears to discern that Consecrated Life must be the sower, cultivator and reaper of a new way of being Church in the synodal process". In this discernment, the urgency of unlearning the anti-evangelical ways of being Church and intuiting the signs of its living presence, of recreating the centrality of the following of Jesus of Nazareth and of a renewed commitment, with the Kingdom and in it, with the poorest, to "live our missionary discipleship with meaning, radicality and re-enchantment". The "Women of the Dawn", on the morning of the Resurrection, are the Icon for the three-year period 2022-2025: a source of inspiration and traveling companions. "In the midst of the uncertainty of the night, they give vitality to our audacity to overcome the fears of so many darknesses, to go out and shout that hope is more certain than the darkness of death and that Jesus is risen".
In the concluding part of the final message, they reaffirm that "Jesus continues to rise with splendid creativity": at the dawn of a synodal Church, of new leaderships, of new human and ministerial relationships, of new itineraries, of new community models according to inter-congregationality , interdependence according to interculturality and intergenerationality, of a healthy relationship with nature, the commitment to continue weaving our unity through the threads of diversity ...
The Assembly also elected the CLAR board of directors for the three-year period 2022-2025. President: Sister Gloria Liliana Franco Echeverri, ODN (Colombia), re-elected. First Vice President: Fr. Olavo José Dalvit, FSC (Brazil). Second Vice President: Fr. José Luís Loyola Abogado, MSpS (Mexico). Third Vice President: Sister Ines Greslebin, ACI (Argentina). Fourth Vice President: Sister Carmen Ferrer, HHCCS (Dominican Republic). Secretary General: Sister Daniela Adriana Cannavina, HCMR (Argentina), re-elected. (SL) (Agenzia Fides, 6/6/2022)