ASIA/CHINA - Bishop Pietro Wu Junwei dies of a heart attack. During the pandemic he had worked to keep churches and activities open 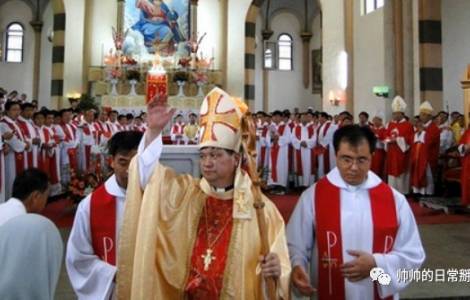 2022-07-06
"Open your heart to welcome the Lord": the retreat of priests and nuns from the diocese of Ningxia underlines the importance of spirituality

Xinjiang (Agenzia Fides) - At 10.30 a.m. on May 10, 2022, His Exc. Msgr. Peter Wu Junwei, Bishop of the Apostolic Prefecture of Xinjiang/Yuncheng, in the Chinese region of Shanxi, died of an acute myocardial infarction at the age of 59.
The Prelate was born on June 27, 1963 into a family of devout Catholics in the town of Xiliulin, Taiyuan. He was the eldest of six children, of whom a brother became a priest and a religious sister. In 1985, he entered the Shanxi Major Seminary and was ordained a priest on December 9, 1990. From 1991 to 1996, Monsignor Wu was a parish priest in Shagou and also carried out the pastoral care of Loufan and Gujiao; from 1996 to 2001 he was diocesan director for ecclesiastical affairs and head of the propaedeutic Seminary of the Archdiocese of Taiyuan, as well as deputy parish priest of the cathedral and diocesan treasurer; from 2001 to 2009 he was rector of the Shanxi Seminary and from 2009, responsible for the Diocese of Xinjiang/Yuncheng. On September 21, 2010, he was consecrated Bishop and appointed Apostolic Prefect of Xinjiang/Yuncheng. From the beginning of his mandate, he dedicated himself to evangelization, promoting catechetical courses for the faithful and the construction of new churches and developing the Apostolic Prefecture according to its particular needs. Lately, during the pandemic, he had worked even harder to keep churches and various community activities open. All this caused him great fatigue, which led him to suffer from some illnesses and unfortunately to death. From May 10, the Bishop's body was exposed to the faithful in the Cathedral of Xinjiang, where his funeral was held on May 16, followed by his burial in the diocesan cemetery of Duanjiazhuang. Msgr. Wu is remembered by the Catholic faithful as a simple, humble Pastor, faithful to the Lord and to the Church, totally dedicated to the episcopal ministry and to the people entrusted to him. Currently, in the aforementioned Apostolic Prefecture there are 28 priests and 15,000 faithful, a diocesan congregation of about 40 nuns, 18 churches, 11 places of worship and some social works. (Agenzia Fides, 6/6/2022)