AFRICA/NIGER - A small Catholic community in a Muslim country 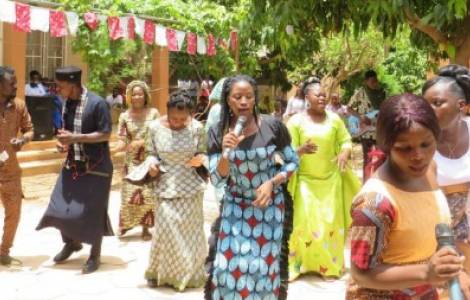 Dosso (Agenzia Fides) - "A breath of fresh air in this time when the heat burns us and the monotony of the desert distorts our horizon", was the definition that Father Rafael Casamayor gave of a group of seminarians from all over Niger who visited the mission of Dosso where the missionary of the Society for African Missions works. "They come from very different origins, some children of emigrants from Togo or Benin, others from Muslim families who discovered the way of Jesus through their neighborhood companions, and all from very humble families who welcomed and supported their vocation. With their simple and fraternal witness, they brought joy to our community", added Fr. Rafael.
"We went to the Djerma Koy building, we visited the market, the craft center, the Catholic school with the nuns' house. In the evening, we then had a meeting with the young people of the Dosso community with a vigil of prayer and conviviality during which these young people spoke to us of their vocation, the reasons, the images or the dreams which brought them to the seminary".
Many of them shared very simple and vivid testimonies. "Sister Anunciata began by telling us about her vocation in Burundi, the life of the nuns she met when she was very young and the attraction they had for her", writes the SMA missionary. "My classmates called me 'the nun', and I didn't like it at all, but I ended up following them", said the nun.
After the concluding prayer of our meetings, explains Father Rafael, the dances began to the rhythms of drums and maracas, which, as I have learned, are the best and most spontaneous way of praising and thanking God, leaving among the young people of Dosso a breath of air with a special scent of new horizons that remain thrilling and tend to rise towards the sky on this flat land." "Niger is a largely deserted Muslim country, and the Church represents only 1% of the population", concludes the SMA missionary, "it is a small community that is alive despite the difficulties, and these young people represent it very well even if they don't realize it." Dosso is a mission in a provincial capital in the middle of the Djerma-Songhay people, heir to a great empire and a solid and ancient culture; the community is small and of diverse origins, but it is already well established and today celebrates the fortieth anniversary of its foundation". (RC/AP) (Agenzia Fides, 3/6/2022)