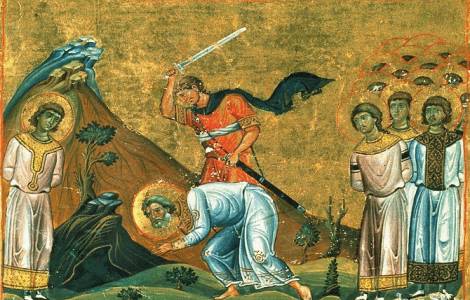 Muscat Agenzia Fides) - Yohanna X Yazigi, Greek Orthodox Patriarch of Antioch, celebrated the first divine liturgy on Friday, May 27 in the new church dedicated to the Holy Martyr Arethas (in Arabic Al-Harith bin Ka'b Al-Najrani) in Muscat, the capital of the Sultanate of Oman. The liturgical celebration in the new church, inaugurated with an official ceremony the previous day, constitutes the culmination of the pastoral visit made by Patriarch Yohanna in Oman, a visit carried out at the helm of a patriarchal delegation including Archbishop Efrem Maalouli, Greek Orthodox Metropolitan of Aleppo. "The Sultanate of Oman" underlined Patriarch Yohanna in some statements issued upon his arrival in the Sultanate "is a tolerant country, where everyone lives in harmony and peace, and where every person feels as if he were in his own land and in the midst of one’s own family".
Representatives of the Sultanate's institutions also took part in the official inauguration ceremony, such as Dr. Ahmed al Bahri, representative of the minister of religious endowments of Oman and director of the department for religious harmony.
The land on which the new Christian place of worship stands was granted to the Greek Orthodox Church of Antioch Quabus bin Said al Said, who died in January 2020 at the age of 79.
During the inauguration ceremonies, the Patriarch and members of the patriarchal delegation also expressed their gratitude to current Sultan Haitham bin Tariq bin Taimur Al Said, calling him "the best successor to the best predecessor" for the wisdom and tolerance with which he leads. the nation.
The figure of the Holy Martyr to whom the new church is dedicated evocatively recalls the millennial history of the Christian communities in the Arabian Peninsula, from the earliest times of the proclamation of the Gospel to today. Arethas (in Arabic Al-Harith bin Ka'b), martyred in 523 AD, was a Christian at the head of the city of Najran and its surroundings, in northern Yemen (corresponding according to some to the modern city of al Ukhdud, currently in Arabia Saudi). Dhū Nuwās, then ruler of the Himyarite kingdom who converted to Judaism, was then in conflict with the king of Abyssinia, the Christian Caleb. To prevent a possible alliance between Abyssinia and the Yemeni city of Najran, led by Arethas, Dhū Nuwās decided to attack the city and exterminate the Christians who lived there, forcing them to choose between death and denial of Christ. Arethas, already in his nineties, was executed together with an unspecified number of fellow Christian martyrs (from a few hundred to 20 thousand, depending on the sources).
The persecution of Dhu Nuwas is also described and condemned in the Qur'an itself (sūra LXXXV: 4-8).
Those who escaped the carnage found hospitality at the Byzantine Emperor Justin I. In Christian martyrologists, Arethas and fellow martyrs are remembered as the Marthyri Homeriti, or "Himyarite martyrs". Arethas, his wife Ruma and the entire community of Najran are also celebrated as martyrs in the Catholic Church, on October 24. (GV) (Agenzia Fides, 28/5/2022)