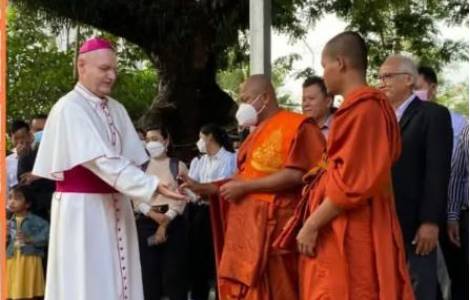 Phnom Penh (Agenzia Fides) - Bishop Olivier Schmitthaeusler, French Bishop of the Paris Foreign Missions Society, was honored by Buddhist leaders in Cambodia for his precious contribution to society. The Apostolic Vicar of Phnom Penh received the recognition of “a Great Buddhist supporter” at a recent event at Ang Montrey Pagoda in Tram Kak district of Takeo province in southern Cambodia. Among the reasons for the award, which confirms the excellent relations between the Catholic community in Cambodia and the Buddhist community, is the recognition of the support offered by the bishop to local Buddhists and to the monastic community of a specific Pagoda. Seng Somony, Secretary and spokesman for the Ministry of Cults and Religions, presented Bishop Schmitthaeusler with a certificate of honor issued by the "Mahanikaya Council of Cambodia", the country’s supreme Buddhist council. Speaking on the occasion, venerable Nget Chamroeun, the abbot of Ang Montrey Pagoda, told the gathering that "as a priest and bishop the French missionary invited Buddhists and Christians to build bridges of peace and reconciliation. "I am humbled by the honor. I thank the Buddhist leaders for working together for society in understanding and solidarity", said Bishop Schmitthaeusler, 51, noting that this recognition is not for himself but "for the Church as a whole". "We are happy to work together as Catholics and Buddhists for the common good. The event shows how the different religions must work in solidarity and fraternity and serve society. The Catholic Church is rooted in Cambodian culture", said the Prelate.
Bishop Schmitthaeusler recalled that when he first arrived in Chamkar Teang village in Takeo province in 2002, there was only one Christian. One of his first projects was to help build a 1,200-meter road to connect the village with Ang Monrei Pagoda. Over the years, the Church had also opened education institutes in the area. The Church also introduced handicraft projects that allowed people to find jobs and preserve Khmer traditions.
Meanwhile, a Catholic community has grown and flourished: "It is nice to note that we travel together as brothers and sisters, and during the era of Covid-19, we have an opportunity to strengthen our relationship. This is how we can walk together to establish peace", added the Bishop.
Seng Somony, a government official, said he was surprised and elated that a Catholic bishop had become a symbol of unity between two religions through his great works . The honor for the French bishop comes less than two months after he received the National Order of Merit medal for his decades of seminal efforts in social development on March 8. Speaking on that occasion, Somony expressed appreciation for the efforts of Christian and Buddhist leaders who work together and promote harmony and peace in Cambodian society. In the 1950s, the Holy See estimated that Catholics in Cambodia numbered about 120,000, with some 50,000 being ethnic Vietnamese. Catholicism nearly died out in Cambodia during the long-running civil war and genocidal Khmer Rouge regime that left at least 2 million people dead. The missionaries returned after the end of the civil war in the 1990s and the Church was reborn from the ashes. Today, Christians make up less than one percent of an estimated 17 million people in Cambodia. About 20,000 Catholics live in three church jurisdictions — the apostolic vicariate of Phnom Penh and apostolic prefectures of Battambang and Kampong-Cham. (SD/PA) (Agenzia Fides, 28/5/2022) 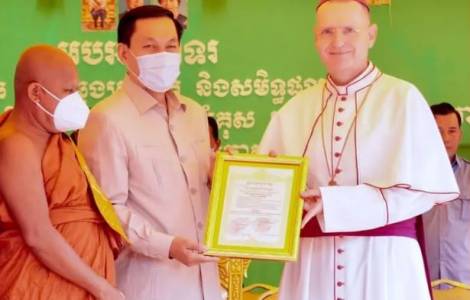