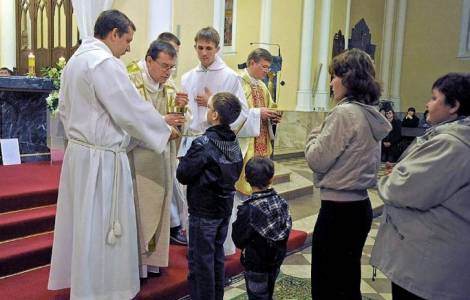 Moscow (Agenzia Fides) - “I invite all the faithful to pray together, here in the Cathedral, the Rosary in communion with Pope Francis, at the end of the month of May on Tuesday, May 31, which as we know, is dedicated to the Holy Virgin Mary. We join the Pope and, through him, the universal Church, to implore the gift of peace in Ukraine and in every part of the world where conflicts are taking place that are often forgotten”. Thus Msgr. Paolo Pezzi, Metropolitan Archbishop of the Mother of God in Moscow, at the end of the celebration for the solemnity of the Ascension, which he presided over in the Catholic Cathedral packed with faithful, announced yesterday, May 26, the participation of the Catholic community of Moscow to pray the Rosary wanted by Pope Francis. As Fides has learned, it will be possible for the faithful to follow the live broadcast of the event in the same Cathedral. Archbishop Pezzi will then preside over the Eucharistic celebration, during which people will pray for peace.
The Catholic Church in Russia immediately mobilized to help refugees and those in need of help due to the situation in Ukraine. For this purpose, as can be learned from the official website of the Cathedral (https://www.catedra.ru/), it is possible to make a donation through three different channels: the Caritas of Saratov (diocese of San Clemente), which directly takes care of refugees in the Rostov region; the Interfaith Foundation for the Promotion of Humanitarian Projects (Mežreligioznyj Fond Sodejstvija Realizacii Sovmestnych Gumanitarnych Proektov); and the Archdiocese of the Mother of God in Moscow, which then sends the donated sums directly to the Holy See. The reason for making donations in each of the ways indicated is a solidarity contribution to refugees. The Catholic Cathedral of Moscow, dedicated to the Immaculate Conception of Mary, is a neo-Gothic style building built in the early twentieth century. Like all the other buildings intended for worship located on Soviet soil, it went through the various phases of the contemporary history of the Church in Russia: closed in 1938, at the time of the so-called great Stalinist purges, it was desecrated and used by the Communist regime as a warehouse and market, to then return to the possession of the Catholic Church after the collapse of the USSR and re-consecrated in 2005. To date, Catholics in Russia are less than 1% of the total population of the Federation. (CD) (Agenzia Fides, 27/5/2022)

EUROPE/RUSSIA - The Franciscans: let us ask God for the gift of peace