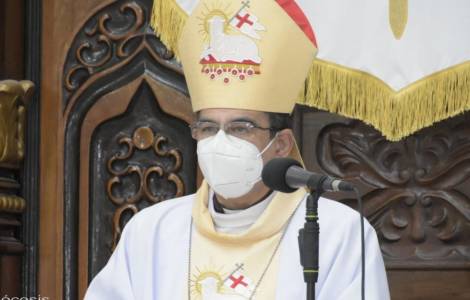 2022-05-20
"Justice and Peace": "the Church will continue to proclaim the Gospel, denouncing the social structures of sin"

Managua (Agenzia Fides) - The Archdiocese of Managua "publicly reaffirms its closeness in prayer to all the people and families who suffer from the effects of the socio-political problems in which we Nicaraguans continue to be immersed with all its effects and to all levels, which has caused our society to stagnate in an environment of insecurity, polarization and intransigence, triggering a dynamic of division and antagonism that prevents overcoming this critical national situation".
The statement from the Archdiocese, dated May 21, sent to Fides, expresses in particular its solidarity and closeness with the faithful and the priests of the parish of Santo Cristo de las Colinas, in Managua, where Monsignor Rolando Alvarez , Bishop of the Diocese of Matagalpa and Apostolic Administrator of Esteli, "finds himself confined, in prayer and fasting", as well as in the parish of San Juan Bautista in the city of Masaya, and its parish priest, Father Harvy Padilla, "who live in an atmosphere of anxiety for their personal safety and the impossibility of exercising their right to live and celebrate their faith in an environment of peace and freedom".
The Archdiocese of Managua concludes by appealing to the National Police, "to stop this useless attitude" and invites them to pray "in order to create a climate of national understanding".
According to information gathered by Agenzia Fides, Daniel Ortega's regime has taken new repressive measures against the Church in Nicaragua, ordering in particular the closure of the television channel of the Episcopal Conference of Nicaragua (CEN). In a video message to the people of God in Matagalpa and Esteli, Monsignor Rolando Alvarez said, "Today I was harassed all day by the Sandinista police, from morning to night they followed all my movements". "In the evening, while I was at my niece's house, I went directly to the agents and asked them why they were persecuting me and they replied that they were obeying orders". "They entered my family circle, endangering the safety of my family". In the video, the bishop announces that he is in the parish of Santo Cristo de Esquipulas, where he has started an indefinite fast until "the National Police, through the Bishops' Conference or its Vice President, let me know that they will respect my privacy". The Bishop asked those who wish to join his fast and go to their parishes to pray before the Blessed Sacrament, sing, praise the Lord and organize prayer vigils. "I will be here in prayer, before the Blessed Sacrament, celebrating the Eucharist, raising my plea to the Lord for this very harsh and cruel situation for all to end. The Bishops of the Episcopal Conference of Costa Rica expressed in a message their solidarity "with the Bishops of Nicaragua and all the brotherly people of this nation". "The message, they write, is sent after certain information coming from this country; the Nicaraguan Bishops have also expressed themselves on the socio-political problems, the tension and the climate of concern they feel for their personal safety; in particular, right now, by Msgr. Rolando José Álvarez Lagos, Bishop of Matagalpa and Apostolic Administrator of Estelí "The Pastors of the Costa Rican Church ask the Risen Lord to grant the people of Nicaragua the gift of peace, so that they may be granted an atmosphere of tranquility and fraternity". The Bishops of Costa Rica assure the Bishops of Nicaragua of their solidarity and their prayers, especially in times of trial, and invite the Catholic people of Costa Rica to raise prayers for the people of Nicaragua and the bishops of that nation." The Bishops of the Episcopal Conference of Costa Rica reiterate the need for our peoples of Central America, in general, to work together for the search of the common good, peace and social justice". The Bishops of Panama also expressed "solidarity with Monsignor Rolando Alvarez and the people of Nicaragua". The Panamanian Bishops stand in solidarity with Monsignor Alvarez "at these times when he is suffering persecution for being a prophet in the face of the difficult situation due to the socio-political crisis that the Nicaraguan people are experiencing". They therefore join in prayer "so that the persecution ceases" and that Monsignor Alvarez and Padrer Padilla can return to live and celebrate the faith in an atmosphere of serenity and peace. (SL) (Agenzia Fides, 23/5/2022)