AFRICA - Food emergency in the Horn of Africa: the worst drought in the last forty years 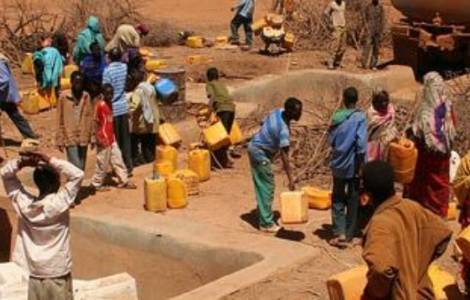 Gode (Agenzia Fides) - "We are running out of time, we need funds to save lives". The undersecretary for humanitarian affairs, Martin Griffiths, returning from a very recent visit to Kenya, has raised a very strong alarm on the emergency that the regions of the Horn of Africa are experiencing. The area is hit hard by the strongest drought ever recorded since 1981: currently 15,000,000 people are affected but could quickly become 20,000,000. In Ethiopia alone, food shortages increased by 80% in 3 months. In the country, due to the difficulties in collecting data in Tigray and Afar, it is not possible to have exact numbers, but in the Somali Region alone, according to WFP, 38.49% of the population, equal to 2.6 million people, have insufficient food consumption.
The Apostolic Prefect of Robe, Father Angelo Antolini, ofm conv., is an eyewitness to what is happening in the Somali Region. In fact, in this period he is in Gode, part of the Prefecture, and personally confirmed the data reported. Fr. Antolini added that the central government is doing what it can but the situation is getting worse. "This is the worst drought in forty years", said Mustafa Muhumed Omar, President of the Somali Region. "It is estimated that one million head of cattle have died. Livestock across the region are in poor health and many more are expected to die from the increase of the disease. Vaccination and feed campaigns are urgently needed to save the reproductive nucleus".
Ethiopian Prime Minister Abiy also spoke with an appeal in which he stressed the need to increase productivity to achieve self-sufficiency in food and basic necessities. The phenomenon of climate change is radically changing the lives of millions of people. Globally, each 1 ° C increase is projected to result in a 20% reduction in renewable water resources, affecting an additional 7% of the population. Data released by the Intergovernmental Authority for Development in the Horn of Africa (IGAD), the Climate Prediction and Applications Center (ICPAC) in the next month predicts drier than normal conditions over much of Somalia, Ethiopia, Djibouti, Eritrea and parts of southern Sudan, northeastern Kenya, southeastern Uganda and eastern Tanzania. (GF/AP) (Agenzia Fides, 23/5/2022)