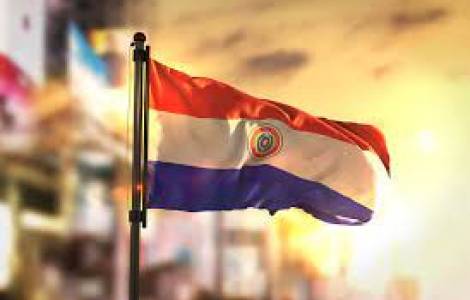 Asunción (Agenzia Fides) - "The independence of the homeland is neither complete nor possible without mutual love between Paraguayan brothers and sisters, following the example of Jesus", writes the President of the Paraguayan Bishops' Conference, Archbishop Adalberto Martínez Flores of Asucnion, in a message delivered on the occasion of the 211th anniversary of independence from Spain on May 15, 1811.
In his message, the Archbishop recalled that around 90 percent of the population are Christians and stressed that "the social and political reality of Paraguay challenges us as Christians" because the country is plagued by multiple forms of violence, emigration, poverty, corruption and characterized by impunity. "Democratic institutions are weak, drug trafficking and organized crime are on the rise," he regrets, stressing that "a Paraguay like this suffers a lot and is subject to many chains that keep it prisoner". "The country of dreams will thus become a nightmare that needs new patriotic heroes to maintain and deepen the feat of independence that we remember today," affirms Archbishop Martínez Flores. He therefore calls on "all citizens and all residents of the state, regardless of their nationality" not to lose hope and to accept the challenges so that a new Paraguay can emerge.
In this context, Archbishop Adalberto Martínez Flores calls for "horizons that will guide our common journey in synodality towards a new, truly independent country for the happiness of our people". Only through dialogue and consensus can a national project, a Paraguay, be developed "that we want and need".
The President of the Bishops' Conference emphasizes that thinking about a different future requires a profound conversion. Structural change "begins with changing mentalities, attitudes, and cultural practices that hinder the realization of the common good". In this context, he addresses a number of specific challenges, citing the economic and political power games on the world stage that "are profoundly affecting the country" and corruption, "both public and private, which is damaging our trust and wasting resources, intended to improve the living conditions of people, especially vulnerable sectors, farmers and indigenous peoples". Finally, democracy must be strengthened and "the authorities must be honest servants of the common good and govern according to fundamental rights" and it is necessary to see others as brothers or sisters, "even if they think differently than we do", because "society is characterized by diversity in all areas: diversity enriches, homogeneity impoverishes".
In Paraguay, the work of public institutions that work to protect life and family is appreciated: "It is very good, but insufficient," emphasizes the archbishop, and calls for "translating this declaration of intent into consistent gestures" and concrete changes to take care of the family, children, young people and vulnerable people and to protect them from abuse."Education and culture are key for the development of people and society," he continued, finally denouncing the poverty and food shortages in large parts of the world population, "although the country produces enough food for everyone".
"Particularly worrying is the development of organized crime, drug trafficking and radical groups", Archbishop Martínez Flores continues, recalling the brutal assassination of the prosecutor Marcelo Daniel Pecci Albertini (see Fides, 12/5/2022): "This heinous crime must not be considered an isolated case, it is a mortal wound in the heart of all Paraguayans...".
In his closing remarks, the President of the Bishops' Conference emphasized: "The republic, the nation and the fatherland cannot be built without honest citizens". The new Paraguay, the land of dreams, "must be based on a national project based on human dignity and the common good, with a national policy of solidarity and fraternity, beyond ideologies and interests of parties and power groups". (SL) (Agenzia Fides, 17/5/2022)

AMERICA/COLOMBIA - Joyful in hope, patient in suffering, persevering in prayer to build reconciliation