ASIA/VIETNAM - Prayer, awareness and concrete help for young women to fight against abortion 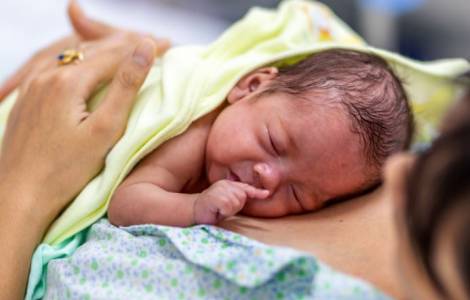 Hanoi (Agenzia Fides) - "Abortion is murder, it is a grave sin and an offense to God. Every day, many children are deprived of the right to life, of the right to grow as human beings", said Fr. Francis Nguyen Kim Phung during the mass celebrated recently in the church of Thai Ha, in the archdiocese of Hanoi, in which 22 children aborted by mothers were remembered: "In particular, we Catholics must be aware that pregnancy is a gift granted by God".
After the mass, the remains of the unborn children were buried by members of the Life Protection Group in the parish cemetery of the church. Also in the church of Thai Ha, another mass was celebrated by Father Joseph Nguyen Van Huu to pray for 24 other children who were deprived of the right to life. In his homily, Father Joseph said:
"Many people are not aware that the embryo is already a human being, therefore they abort too easily".
In many other parishes across Vietnam, there are groups of volunteers who silently collect abandoned fetuses from hospitals and celebrate masses for them, giving them a dignified burial. In particular, the "Life Protection Group" of Xuan Loc Diocese buried 700 unborn children, regardless of their religion. The faithful prayed in the "Cemetery of unborn children".
Father Joseph Nguyen Van Tich, chaplain of the Life Protection Group of the diocese of Xuan Loc, wanted to build a special cemetery where unborn children can rest in peace and where the faithful can pray and ask God for forgiveness for abortions practice. For seven years, the priest has been working with the members of the group to collect the bodies of innocent children, visiting hospitals and clinics to request the burial of the bodies of the fetuses. To carry out this task, he insists with doctors and nurses: "I am a Catholic priest, I believe that fetuses are human beings; I do not condemn, do not judge, nor blame anyone. I just want to receive the aborted fetuses to bury them. Let me take them, please", he goes on to say.
To date, the Cemetery of Unborn Children houses more than 53,000 children's remains. This work was recognized by the famous Vietnamese newspaper “Thanh Nien”, of Ho Chi Minh City, the second most widespread newspaper in the country, which called the priest “Father of the unborn children”, awarding him a medal of honor. On receiving the award, Father Joseph Nguyen Van Tich replied, "It is a work that is only for the glory of God".
Among the women who choose to have abortions in Vietnam, most are young mothers who are victims of abuse, even in married life. There are many reasons (economic, social, cultural, psychological) that can push a woman to choose to have an abortion. In recent weeks, Thai Ha Church's "Protection of Life Group" has held a public march to promote the protection of life and raise awareness among people, especially young women, with the message: "Give love. Do not sow death. Protect life". Members of the group note that, thanks to the protests, "awareness that abortion is an evil that is increasing dramatically" and note that "the protection of life is the responsibility of all members of society". It must be said that, to concretely help young women not to have an abortion, the group raises funds to help pregnant women, often in economic difficulty, by providing them with material, psychological and spiritual support. According to recent statistics, there are about 300,000 cases of abortions every year in Vietnam, mostly by unmarried girls between the ages of 15 and 19. (AD/PA) (Agenzia Fides, 9/5/2022)