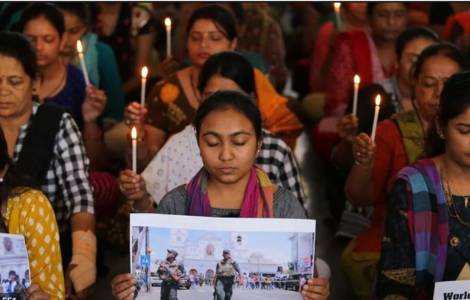 2022-04-07
The National Director of the PMS: "Sri Lanka needs justice and transparency"

2022-01-14
One thousand days after the Easter massacre: day of commemoration

Rome (Agenzia Fides) - "We will not stop demanding truth and justice for the attacks of 2019. The authorities must commit themselves to finding the perpetrators and instigators of the massacres. It is necessary to establish who was really behind the attacks. This is not just a problem for Catholics. All Sri Lankans suffered after this attack." This is what Chandima Yasawardana saidd in an interview with Fides, one of the victims involved in the Easter attacks which, on April 21, 2019, in Sri Lanka left 279 dead and 500 injured, striking churches and hotels.
After the celebrations commemorating the third anniversary of the massacre, a delegation of representatives of the Sri Lankan Church and families arrived in Rome a few days ago and were received by Pope Francis. Many people, victims of these brutal attacks, were able to testify to their suffering, giving a tangible sign of their deep faith. Chandima, 47, is from Negombo, she lost her husband and two daughters: "It is difficult, and it was very difficult to think of a future - she tells Fides - I thank Cardinal Malcolm Ranjith and our entire Catholic community in Negombo, they gave us fundamental support to face daily life. Today I have nothing to ask for myself, except that no mother, no woman ever experiences such a painful experience, that of seeing his family destroyed. I pray God to preserve and bless the Pope, our Cardinal, and the unceasing work of the priests and nuns".
It is impossible to forget the blood of the hundreds of bodies torn to pieces in the pews of the churches, and the deep pain of the loss of the members of one's own family. So says Prageeth Thushantha, who lost his 35-year-old wife, 14-year-old daughter, 9-year-old daughter and 7-year-old son in St Sebastian's Church in Negombo. The man said: "I did three jobs, I did not sacrifice myself so that other people could kill them. I want to know why and by whom they were killed." Gloriya George, 22, from Batticaloa, along with her 2-year-old sister, saw her father die in her arms as she took him in a taxi to the hospital, where he was also robbed of gold and money. "When it happened, I thought the Lord had abandoned me; but then I changed my mind and realized that God had given me strength and courage to face it all this". "We want to know the truth", said Shiran Anton Jansz, 51, a taxi driver in Negombo, to Fides. "My wife and daughter are dead. Today, we thirst for justice: it is with hope in God that I am moving forward".
"We have to live, continue to live for all those who lost their lives that day", said Hasaru Jayakody, a 20-year-old engineering student, also from Negombo. His mother, who was standing a step in front of him in the church, did not survive the explosion.
"The Catholic Church accompanies the needy and the last", says Fr. Nicola Subasinghe. "We bring our appeal for the search for truth and justice and delivered it to Pope Francis, asking for his support and finding in him a warm welcome. We ask all the faithful - he concludes - to pray together with us, in the name of God, in search of the truth. We know that God, who is Providence does not abandon us". (ES) (Agenzia Fides, 7/5/2022)

AMERICA/BOLIVIA - The Bishops: "It is time to stop wasting time in the instrumentalization of justice"

AFRICA/NIGERIA - The Christian denominations of Kaduna: "No to the hypothesis of hiring foreign mercenaries to fight against terrorists"