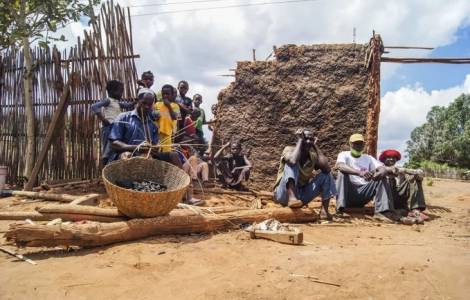 Maputo (Agenzia Fides) - "Insecurity prevails, the internally displaced are still many. I personally ask you, those who know me, to pray. Pray for me, and pray for peace". This is the appeal launched by His Exc. Mgr. Mgr. António Juliasse Ferreira Sandramo, Bishop of Pemba, the capital of the Mozambican province of Cabo Delgado, which has been devastated by the violence of jihadist groups since 2017.
In the last year, the Mozambican army, thanks to the assistance of foreign military contingents, primarily the one sent from Rwanda, has recaptured much of the territory that had fallen into the hands of the jihadists. But the insecurity remains as well as the tragedy of the displaced (more than 850,000) remains unsolved.
In fact, Msgr. Sandramo stressed that the security situation in the province, which has been severely affected by terrorism, is still delicate, and that the displaced population remains in need of humanitarian aid.
"There continue to be attacks - the Bishop reports - especially in the Nangade region, many villages were attacked in the last three months. As a church, we can only humanely help those forced to move from one place to another. The security issue is in the hands of the government and international partners", he underlines.
In addition to barbaric killings, the terrorists had destroyed social and economic infrastructure, especially in the
northern districts of Cabo Delgado, among them churches and residences belonging to the Catholic Church. The Bishop of Pemba said that, for the time being, there were no plans to rebuild them. "The most serious is Muidumbe, where the church and the priests’ house, where we had a community radio station, were all destroyed. So, there, certainly, we will need a lot of investment to rebuild the parish mission. And we also saw the church in Mocímboa da Praia destroyed", says Msgr. Sandramo. (L.M.) (Agenzia Fides, 5/5/2022)