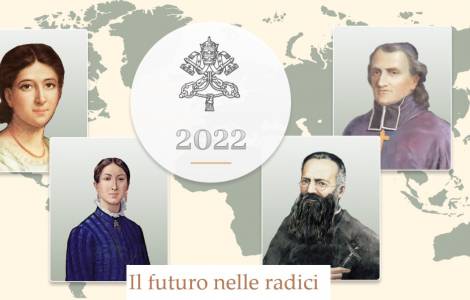 Vatican City (Agenzia Fides) - Today, May 3, 2022, marks important anniversaries for the PMS: the bicentenary of the birth of the Society for the Propagation of the Faith, founded by the Venerable Pauline Jaricot (1799-1862), and the centenary of the Motu proprio "Romanorum Pontificum" of Pope Pius XI with whom the Holy Father designated as "Pontifical" three of the four Mission Societies: the Pontifical Society for the Propagation of the Faith, the Pontifical Society of the Holy (Missionary) Childhood, and the Pontifical Society of St. Peter the Apostle for the formation of indigenous clergy in mission territories.
These anniversaries take place in a special context: on May 22, the Venerable Servant of God Pauline Jaricot will be beatified in Lyon, her hometown, during a Eucharistic celebration presided over by the Prefect of the Congregation for the Evangelization of Peoples, Cardinal Luis Antonio Tagle. Archbishop Giampietro Dal Toso, President of the PMS explains in this regard: "The bicentenary of the Pontifical Society for the Propagation of the Faith, linked to the beatification of Pauline Jaricot, is first of all the confirmation of her charism: in fact this anniversary it is not a thing of the past, but also has a future perspective. All this is so that we understand everything we have experienced thanks to Pauline Jaricot and carry it forward. She herself said that this tree would bear much fruit, and the fruits, 200 years later, continue to ripen if we consider that the Pontifical Societies are spread throughout the world: there are more than 120 national directions".
Pauline's life was rich in spiritual fruits: at the age of 17, she privately pronounced her vow of consecration to God in the chapel of Notre Dame de Fourvière. The following year, under the name of "Reparadoras", she founded an Association that was the initial expression of a vast spiritual and lay movement that would encourage devotion to the Blessed Sacrament, the cult of the Sacred Heart, and the practice of the Living Rosary. At the age of 19, in 1818, she began collecting funds for the mission among her father's workers, a real network organized in "groups of ten", with a branch of hundreds and then thousands of groups, in which the participants met to pray and donate "one cent" for the missions, creating other groups in turn. Soon the system spread throughout France and Europe, and then was institutionalized with the creation of the Society of the Propagation of the Faith.
In 1826 Pauline had a new idea to encourage the faith of her contemporaries: the "Living Rosary". The young woman, who was only 27 years old, gathered her members every fortnight, committing each one to pray a mystery of the rosary a day, to pray the entire rosary together. At Pauline's death, there were more than 2,250,000 Living Rosary Associates in France, not counting members from foreign countries. This Society is still active and present in several countries.
In 1833, with the "Daughters of Mary", a community of pious girls she founded, she settled in Fourvière, the hill overlooking Lyon, in a house to which she gave the name of Lorette (Loreto), in memory of the House of the Holy Family.
Two years later, already ill, she traveled to Rome, where she met Pope Gregory XVI, who encouraged her in her work for evangelization and a life of prayer. The Pope granted her a great honor for those times: he made her walk in front of him against all protocol. "Pauline's evangelizing spirit speaks to all of us today - continues Archbishop Dal Toso -.
Her real interest was to return the Gospel to a France that had suffered a wave of secularism after the French Revolution. And with that evangelizing zeal, she developed some very interesting ideas that continue to this day, such as the Society for the Propagation of the Faith and then the Living Rosary. The Society of the Propagation of the Faith whose interest was to help the distant missionaries but involving the neighbors, thus involving the French in this work of evangelization towards those far away in mission countries through prayer and offering and offering also of his own sufferings. It seems to me that this trait can be well understood when she said that she did not want to enter the convent or she did not feel the vocation to the convent because her convent was the world. The world as a place to live the Christian faith and, in this sense, also as a place to evangelize and transform". Today, the Pontifical Mission Societies manage and distribute the Universal Solidarity Fund which - fueled by the offerings of World Mission Sunday, the penultimate Sunday of October - benefits thousands of small dioceses in the poorest nations every year, contributing to their pastoral and spiritual needs, to its evangelizing mission, for example building a chapel, supporting a convent of cloistered nuns, giving life to a radio or contributing to the education of children or to the life of the catechists' families: each local Church presents its pastoral needs and then, in complete autonomy, manages the subsidies for the proclamation of the Gospel, mission and cooperation. The spirit and charism of the PMS can be summed up in the phrase of Blessed Pablo Manna, founder of the Pontifical Missionary Union: "The whole Church for the whole world". (EG) (Agenzia Fides, 3/5/2022)