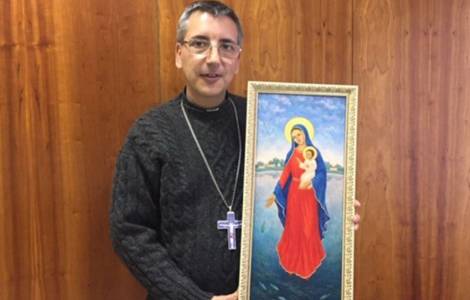 Nursultan (Agenzia Fides) - Mgr. José Luis Mumbiela Sierra, Bishop of the Diocese of the Holy Trinity in Almaty, will preside over the Catholic Bishops Conference of Central Asia for the next four years. This is what was decided, by secret ballot, in the first meeting of the Central Asian Bishops, currently underway in Nursultan, Kazakhstan.
The roles of vice president and general secretary will be held respectively by Msgr. Jerzy Maculewicz, Apostolic Administrator of Uzbekistan, and by Msgr. Evgeny Zinkovsky, Auxiliary Bishop of the Diocese of Karaganda.
Inaugurated on April 26, the first assembly of the newly created Conference, which ends tomorrow, April 30, 2022, sees the participation of the Bishops of Kazakhstan, Kyrgyzstan, Tajikistan, Turkmenistan and Uzbekistan, Mongolia and Afghanistan. On the inaugural day, they were also joined by the Apostolic Nuncios and Ordinaries of the countries involved, the President of the Senate of the Parliament of the Republic of Kazakhstan, Ashimbaev Maulen Sagatkhanuly, and the Minister of Information and Social Development of the Republic of Kazakhstan, Umarov Askar Kuanyshevich.
Also present, in connection from the Vatican City, Cardinal Luis Antonio Gokim Tagle, Prefect of the Congregation for the Evangelization of Peoples, "is called to play a special role in the ministry of the Church in the territories of the countries of Central Asia. Although Catholics in this region are a minority, this does not detract from the role that the Church plays in society". The Cardinal outlined some guidelines for the work of the new Conference. Among these, the development of friendly relations with other religions, the constant formation and correct formation of priests, nuns and laity who carry out catechesis in parishes. Another fundamental aspect is "the translation and publication of Catholic books, prayer books and manuals in national languages, because this can contribute to the spread of the Gospel in various sectors of society, to the synodal process, to work with young people and families and the implementation of Caritas projects". (LF/PA) (Agenzia Fides, 29/4/2022)