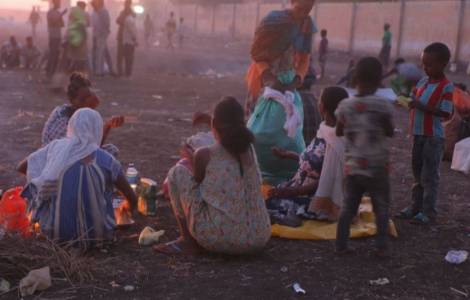 2022-06-02
"The Church is not yet an angelic community. It lives in the world without being of the world"

2022-05-16
"An abyss that only divine love can fill": the canonization of Charles de Foucauld experienced by a missionary of the 'last mile'

Addis Ababa (Agenzia Fides) - "At the end of 2021, when we understood that the conflict would continue, we agreed that more attention would be needed and to start an aid program. At that point, the Church, the Bishops, the clergy took action to seek different sources and bring aid not only in Tigray. We launched an appeal and a fundraiser was launched which involved Caritas Internationalis, and other organizations such as Cafod, the Italian Caritas itself and others, and we reached the figure of around 2 million euros". Shiferaw Mamo, Program Manager of Caritas Ethiopia spoke to Fides. He explains in detail the decision taken by the Ethiopian Catholic Church, last December, at the end of a year marked by a catastrophic war, to organize a fundraiser to reach the exhausted populations of Tigray but also of other regions such as Amhara, Afar and Oromia. The project aims to provide humanitarian assistance and rehabilitation to people affected by food insecurity and conflict.
"Taking advantage of the truce launched by the government and collected by the Tplf (Popular Front for the Liberation of Tigray) - notes the Head of Programs - we made a proposal after having also collected data from the UN and the government and submitted it to Caritas Internationalis. The situation is desperate, with millions of people displaced in various regions and populations on the brink. The war, in fact, unfortunately crossed the borders of Tigray, overflowing into various other areas of the country and forcing more and more individuals to flee or to food insecurity. It destroyed schools, hospitals, infrastructure. For this reason, driven by the dramatic humanitarian emergency, we have decided to launch an appeal. The budget that will eventually be raised will exceed two million euros and will reach around 200,000 individuals. At the moment we already have 600,000 euros available and we plan to leave these days with direct aid".
In the meantime, after very difficult months, there are minimal signs of relaxation in Tigray and in the surrounding areas, which allow the rescue organizations to bring aid in a more constant and regulated way. Shiferaw Mamo adds: "We have made some progress in the last two weeks, flights organized by the UN to Makalle, for example, are now two per day, while before they were two per week. This is essential for transporting medicines, money and basic necessities. But that's not enough because ground transportation is much easier for food. In the last two weeks, only 21 trucks have left, too little for an exhausted population of millions of people. There are trucks waiting to leave and we would like to fill them with food but we do not know when it will be possible to obtain the permit. Something is moving and coordinated by the United Nations, negotiations are moving forward to reach a definitive peace. I am sure that a process is being carried out behind the scenes as well and I want to hope that with all the actors involved, such as the African Union, the former President of Nigeria Obasanjo, and the Secretary General of the United Nations Guterres himself, as well as the Church, we will soon reach a positive result, for the good of the population". (LA) (Agenzia Fides 29/4/2022)